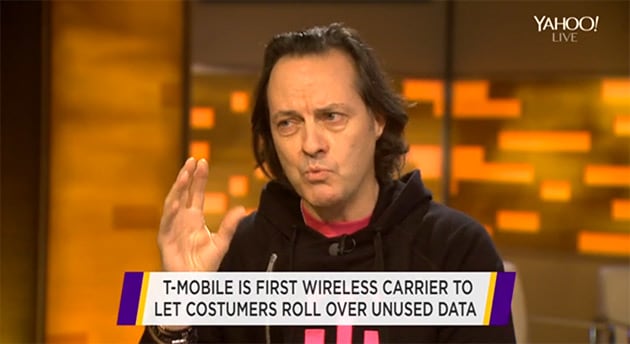 T-Mobile's latest Uncarrier announcement might lack the pomp and circumstance of a big media event, but CEO John Legere's conversation with Yahoo Tech's David Pogue is already proving fruitful. Once January rolls around, T-Mobile customers will be able to roll over their unused data into what T-Mobile calls a Data Stash for up to a year, and the carrier will give its subscribers "up to" 10GB of free data in their new stashes just to get things started. There's no cap on how big your stash can swell either, though T-Mobile's recent wideband LTE launches (in a nutshell: you get faster LTE without having to buy a new phone) might make it a little tougher to keep extra data around to bank.

The thing you've got to remember is that T-Mobile is only offering these data stashes to customers who qualify. As per the carrier's press materials, you'll get a data stash of your very own if you have a postpaid Simple Choice and "purchased additional 4G LTE data, 3GB or more for smartphones and 1 GB or more for tablets."

If you've been watching Legere for any appreciable period of time, you'll know he's... a bit of character. So far, his explanation of T-Mobile's updated vision has involved plenty of swearing (on consumer fear of rolling over their monthly data allotments: "I know you can't swear on this station, but it scares the shit out of people and they buy up."). Still, the news doesn't need to be sensationalized -- it only makes sense that the data you pay for remains under your control, instead of being yanked out from under you at the end of the month. It's also the first time that we've seen a national carrier commit to such an undertaking; C Spire Wireless introduced its so-called Rolling Data plans within the past day.

Source: T-Mobile
In this article: johnlegere, lte, mobilepostcross, t-mobile, tmobile, uncarrier, uncarrier8.0
All products recommended by Engadget are selected by our editorial team, independent of our parent company. Some of our stories include affiliate links. If you buy something through one of these links, we may earn an affiliate commission.