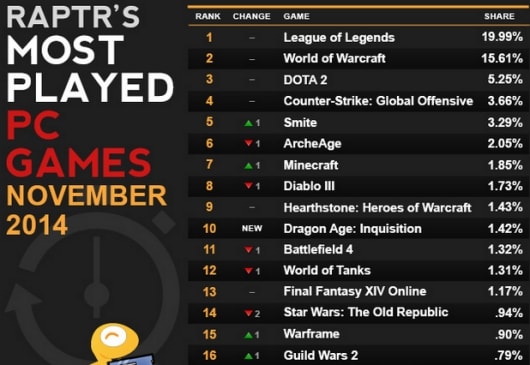 Another month, another Raptr report. Yesterday Raptr.com posted its most played PC games list for November, and MMOs did rather well. Unsurprisingly, World of Warcraft surged up the list to #2 thanks to the Warlords of Draenor expansion. "The MMO's monthly play time was up 71.3% versus October," Raptr's press release says. And though WoW "likely" drew from League of Legends' numbers, it couldn't quite usurp the MOBA's #1 seat.

Among other MMOs, ArcheAge playtime "cratered by 39.97%," but World of Tanks and Final Fantasy XIV both saw rises in theirs. Guild Wars 2 rose in rank, Raptr says, but lost playtime in November vs. October. SWTOR fell two places since October.

As always, Raptr roundups come with the caveat that they represent Raptr users on PC, not all gamers; some MMO studios are also known to boost their Raptr numbers with in-game incentives. But since some of these games refuse to release population data, you might call this the next best snapshot of popularity outside of touring the servers yourself. 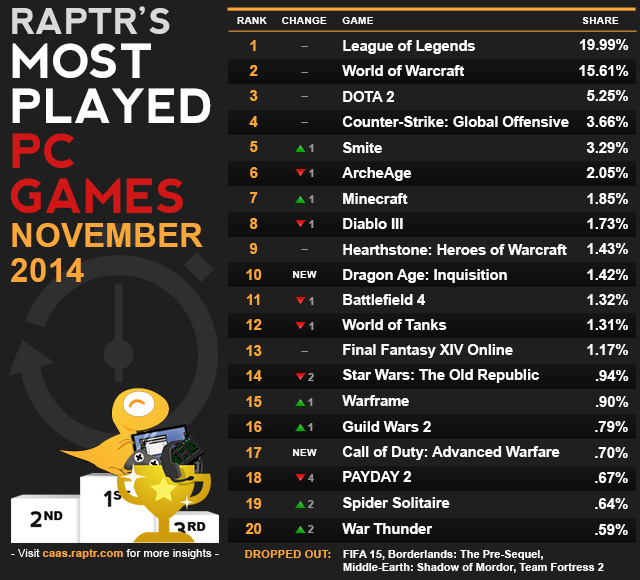 [Source: Raptr press release, which we're including below]

Dragon Age: Inquisition and Call of Duty: Advanced Warfare debuted in the Most Played list this month. World of Warcraft's latest expansion gave the ten-year-old MMO an upsurge, while Spider Solitaire made a surprise return into the top 20 after an absence of over a year. The guilty parties know who they are.

League of Legends remained in first place in November, despite losing 15.88% of playtime compared to October. The game peaked in the beginning of the month, following LoL's Halloween sales event. While gameplay remained steady throughout most of the month, the 4.20 update brought with it some long queues that significantly impacted play time.

World of Warcraft's Warlords of Draenor likely pulled time from LoL, as well as other major games. The MMO's monthly play time was up 71.3% versus October. As expected, the expansion and game's ten-year anniversary events significantly impacted daily play time, which roughly doubled after the launch of the Draenor expansion and remained strong through the end of November.

The rest of the top five games weren't so fortunate. DOTA 2, Counter-Strike: Global Offensive, and Smite, which beat out ArcheAge for fifth place, all saw a net drop in hours. Though DOTA 2 and CS:GO suffered double digits drops (12.49% and 11.59%, respectively), Smite was down less than one percent.

Chart newcomer Dragon Age: Inquisition made a strong entrance into November's Most Played, landing in tenth place despite a late November release.

While slipping in the ranks, World of Tanks managed to gain 7.72% play time compared to October. Though the WGLNA Gold League Qualifying rounds happened throughout the month, play time was at its peak during Thanksgiving weekend, due to XP multipliers and holiday deals on premium goods.

Final Fantasy XIV increased in play time by 20.97%. The rise could be attributed to late October and early November hotfixes to the game, as well as the release of the Game of the Year edition that offered additional 60 free days of adventure (plus all the previously released content). Mid-month DDOS attacks, which caused login difficulties, did not have a major impact on play time.

Call of Duty: Advance Warfare -- always more of a console juggernaut -- launched in early November, and based on current trends we may not see it in December's Most Played.

For the first time since October 2013, Spider Solitaire made its way back into Most Played. Turns out Thanksgiving isn't just about turkey, football, and arguing with relatives -- it's also about playing Solitaire, as gameplay hours for the month peaked on the 27th.

Note: The Share number by each game represents that title's gameplay time as a percentage of the total time spent on all the PC games played by Raptr members, and is useful for comparing the relative amount of play time between particular games.

In this article: archeage, ffxiv, final-fantasy-xiv, Guild-Wars-2, league-of-legends, lol, mmo, moba, numbers, raptr, social-media, star-wars-the-old-republic, statistics, stats, swtor, warlords-of-draenor, world-of-tanks, World-of-Warcraft, wot, wow
All products recommended by Engadget are selected by our editorial team, independent of our parent company. Some of our stories include affiliate links. If you buy something through one of these links, we may earn an affiliate commission.