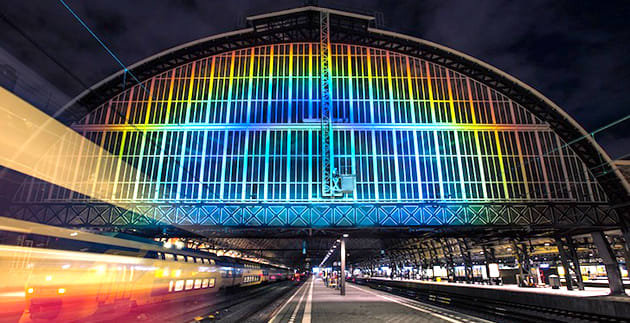 In a big win for the environment, New York just became the first state in the country to ban hydraulic fracturing, the controversial natural gas drilling technique also known as fracking. Governor Andrew Cuomo announced the decision this week following the release of a report that raised concerns about the health effects of fracking. In other green energy news, Australian households are beefing up their use of solar energy at an impressive rate -- one in five Australian homes is now powered by the sun. (By comparison, just 0.4 percent of homes in the US have solar panels.)

If you're looking for a cheap and efficient source of heat, here's a product to look out for: Egloo is a clever little heater that harnesses candle power to heat a room without wasting electricity. The device concentrates the heat from the flame of a few candles inside a terra-cotta dome, radiating warmth into a room even after the candles are blown out. If you're more of a DIYer, Inhabitat also has a video that offers step-by-step instructions explaining how to make a similar electricity-free radiant heater using a couple of terra-cotta flower pots.

Sitting is killing us -- and most of us spend the majority of our day in a seat -- at the office, on the train or on the couch. Dutch design firm RAAAF teamed up with artist Barbara Visser to radically reimagine the typical office -- and it has zero chairs. High-speed rail is coming to California -- eventually. And when it finally does, the state will need new stations to serve the speedy trains. Last week, the doors officially opened at the Anaheim Regional Transportation Intermodal Center, a transit hub designed by HOK Architects that's expected serve the transportation needs of more than 3 million people annually in the coming years. In other transit news, Dutch designer Daan Roosegaarde lit up the Amsterdam Central Station with a brilliant installation that casts a colorful rainbow of light on the building's facade. Continuing with the theme, artist Pablo Valbuena used a light installation to transform a Paris train station into a science fiction set. Light and sound travel from one end of the station to the other at varying speeds, giving visitors the sensation of moving when they are standing still.

For generations, we've wondered if there's life on Mars. And now, with help from the Curiosity rover, we might be getting closer to an answer. Using data from the rover, scientists have found evidence of methane spikes on the red planet's surface, which may have come from bacteria-like organisms. If it proves to be true, it would be the first life detected on another planet. In other tech-related news, a dog named Derby, who was born with disfigured legs, was able to run for the first time with a pair of 3D-printed legs, and a man was fitted with two robotic limbs that he controls with his mind. Birth control has always been a bit of tug-of-war between the sexes, but that could change with the creation of a new male contraceptive made from the Justicia gendarussa plant that has proven to be 99 percent effective. Writing has become more difficult than ever in the digital era, given all the distractions afforded by the internet. A couple of entrepreneurs have come up with a solution to those constant distractions with the Hemingwrite, a device that looks and feels like a typewriter, but contains a small e-ink display and stores your creative output in the cloud. But most importantly, it doesn't connect to the internet -- save for its cloud syncing. And with the holidays fast approaching, Inhabitat editor Yuka Yoneda shared her recipe for how to make an edible snow globe, a one-of-a-kind creation that's sure to be the talk of any holiday gathering.

In this article: eco, eco-friendly, green, inhabitat, transportation
All products recommended by Engadget are selected by our editorial team, independent of our parent company. Some of our stories include affiliate links. If you buy something through one of these links, we may earn an affiliate commission.