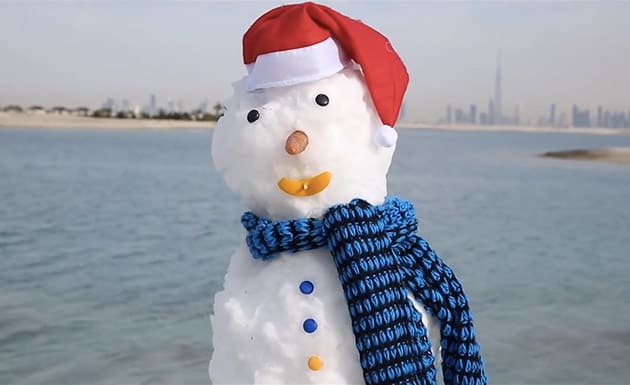 Snow isn't something you'd usually associate with Dubai, not when summers have an average temperature of 104 degrees F and the coldest of winters is only around 57 degrees. But the Kleindienst Group of real estate developers are positive they can simulate snowfall on the streets -- or at least on The Heart of Europe (THOE) islands within Dubai's The World man-made archipelago. The group first announced its plans to make it snow on the islands earlier this year, but now it's sharing how it plans to do so and has even made a test snowman, just in time for Christmas. Company CEO Josef Kleindienst told 7 Days in Dubai that his company plans to put snowmakers on select THOE streets, which is made up of islands fashioned after European locations, such as Austria, Germany, Sweden, St. Petersburg and Monaco.

The streets will also be cooled using underground pipes so the snow doesn't melt as soon as it hits the ground. As the snow melts, a subsurface mechanism collects the water and uses it to create snow again. Scientists from the Fraunhofer Institute in Germany believe that the system will make it possible to achieve an 81 degree Fahrenheit temperature, even during summers, which is apparently the ideal outdoor temp in Europe.

Kleindienst knows full well how crazy it sounds to build and maintain climate-controlled outdoor locations, but he says his company's execs were convinced when their team of German scientists concocted the plan: "If you can heat a pool outdoors in the winter, why can't you cool an area outdoors in the summer?" While he believes the test snowman proves the system can work and claims that its energy consumption is "not more than a mall" (it's unclear whether he means consumption for each street or for all of THOE, though), not everyone's convinced. Sustainable development expert Sougata Nandi says:

Maintaining open-air spaces during peak summer will be heavily energy intensive. For example, to cool enclosed areas such as the ski slopes in Mall of the Emirates consumes huge energy. So to make it snow, and keep the snow outdoors, would be a lot of energy.

Source: 7 Days in Dubai
In this article: ClimateControl, dubai, moderncity, snow
All products recommended by Engadget are selected by our editorial team, independent of our parent company. Some of our stories include affiliate links. If you buy something through one of these links, we may earn an affiliate commission.