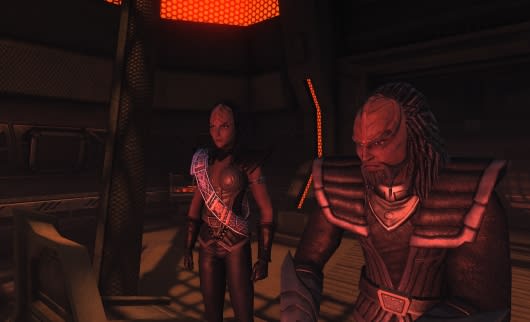 Klingons have long been the second-class citizens of Star Trek Online, although as of recent expansions they've come into their own in both content and culture. Reader Sean sends us in his wicked-looking avatar to be our final One Shots of 2014. See you all on the flip side!

"Behold, my alter-ego, Shia'Tor of House Breknar, who is busy making plans aboard the IKS Heart of Praxis," he wrote. "There are plenty of Federation carebears to troll -- I mean, hunt."

Want to be featured in a future edition of One Shots? Send your favorite MMO screenshots to oneshots@massively.com, and don't forget to include your name, the name of the game, and a description of the scene. Large, colorful, UI-free shots that tell a story and really show off the game make for the best images. Look ma, we brought back One Shots!
In this article: bring-back-one-shots, cryptic, cryptic-studios, f2p, free-to-play, galleries, gallery, one-shots, perfect-world, perfect-world-entertainment, pics-or-it-didnt-happen, pwe, reader-screenshots, reader-submissions, sci-fi, screenshot, screenshots, star-trek, star-trek-mmo, star-trek-online, sto, user-submissions
All products recommended by Engadget are selected by our editorial team, independent of our parent company. Some of our stories include affiliate links. If you buy something through one of these links, we may earn an affiliate commission.