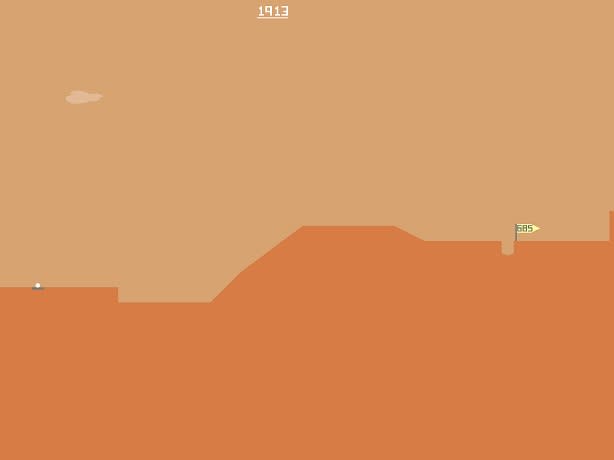 ATTENTION: The year 2014 has concluded its temporal self-destruct sequence. If you are among the escapees, please join us in salvaging and preserving the best games from the irradiated chrono-debris.

Imagine you're stranded in the middle of a vast desert with nothing but a golf club and ball, rolling hills of sand stretching as far as the eye can see. You're not going anywhere soon. May as well play a few thousand rounds and work on your swing, right? Whoa, did you see that cactus on hole #316? Maybe it was a mirage, but I swear I found a rock on hole #537. Square Enix Montreal's Hitman Go takes the assassination series' violence and turns it into a diorama-style puzzler. With each carefully considered move, the pieces in the dollhouse-like levels shift slightly, challenging Agent 47 to open doors, pick up briefcases and kill targets without being spotted. Hitman Go is everything great about mobile gaming; it executes a simple premise in a pick-up-and-play fashion while offering plenty to enjoy. It succeeded as a puzzle game, mixing easy levels in with head-scratching challenges to keep the "a-ha!" moments coming. Hitman Go is essential for all iPad and Android tablet owners. Following the tale of real estate agent Alfie Banks, A Golden Wake skips through the economically hopeful period in American history following the first World War. The adventure game focuses on Florida's land boom in the 1920's, in which Banks attempts to cash in on the burgeoning Miami suburb Coral Gables. The misguided hero gets caught up in mob dealings while convincing residents to invest in the lavish city's future, intermittently solving point-and-click puzzles as his journey carries on. Developer Grundislav Games mixed a pretty, VGA adventure with historical fiction in A Golden Wake, capturing the beauty and mood of an understated time in America. Six years later, it's tough to imagine any twin stick arcade-style shooter matching the glorious Geometry Wars 2. Series veterans will almost certainly agree that Lucid Games' Geometry Wars 3: Dimensions doesn't quite reach the same level of magnificence as its predecessor. Still, the bright, frenzied shooter flaunts the same twitchy dance between chaos and, well, more chaos evoked in Bizarre Creations' past games. Geometry Wars 3 adds a challenging campaign and an expanded upgrade system to the mix, but the true evolution of the series is its literal depth, as the levels' neon planes are now various three-dimensional shapes. In all, Geometry Wars 3 feels enough like a different game compared to the past XBLA hit, thanks especially to those mind-bending levels, that I'm all the happier for it. Every year, I make a point of highlighting one sports game in my "Best of the Rest" list. This year includes one caveat: Madden NFL 15 was not necessarily the best sports game to launch in 2014. Rather, I opted to offer a little appreciation to a much-maligned series that improved in many ways this year. As I argued in my review, Madden 15 found its identity this year, setting aside its "most authentic" mantra for a more accessible and educational version of football. The defensive side of the ball received a significant overhaul with added controls and on-field indicators as well as a new pass-rusher-minded camera angle. Those improvements, along with the instructional Skills Trainer mode, make Madden 15 a commendable entry in EA Sports' long-running football series.
[Images: Blinkbat Games, Square Enix, Wadjet Eye Games, Sierra, EA Sports]
Joystiq is highlighting its 10 favorite games of 2014 throughout the week. Keep reading for more top selections and every writer's personal picks in Best of the Rest roundups.
In this article: a-golden-wake, android, best-of-2014, best-of-the-rest-2014, desert-golfing, geometry-wars-3-dimensions, hitman-go, ios, ipad, iphone, joystiq-best-of-2014, madden-nfl-15, microsoft, mobile, pc, playstation, ps3, ps4, recommended, xbox, xbox-one
All products recommended by Engadget are selected by our editorial team, independent of our parent company. Some of our stories include affiliate links. If you buy something through one of these links, we may earn an affiliate commission.