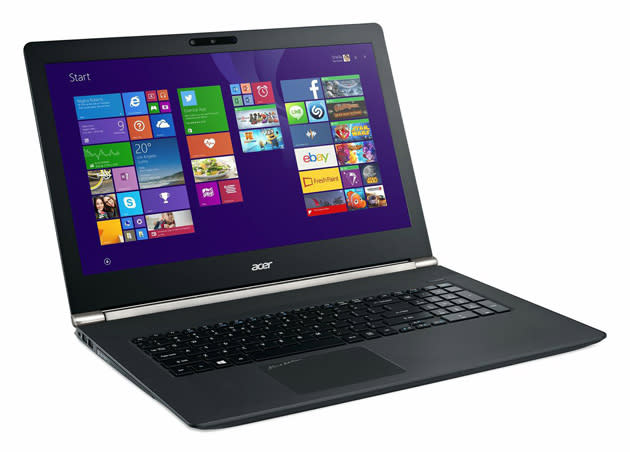 Acer is showing up at CES with a lot of laptop upgrades in store, and its Windows PC revamps have a few tricks up their sleeve. By far the highlight of the mix is a new version of the high-end V 17 Nitro (above) that includes an Intel RealSense 3D camera. The depth sensor lets you control games and other supporting apps with hand motions instead of reaching for the trackpad and keyboard. If you're the creative sort, it'll also let you scan your face and other 3D objects for inclusion in games or 3D printing projects. There aren't any major upgrades under the hood, although you're still getting a beefy 17-inch desktop replacement between the quad-core 2.5GHz Core i7 chip, GeForce GTX 860M graphics and choice of solid-state (128GB or 256GB) or spinning hard drive (1TB) storage. You won't have to wait long to give this system a try, as it's shipping in January. However, it's not yet clear what the trick camera adds to the price, if anything.

And don't worry if you're not wowed by 3D features -- there are a couple of performance upgrades on the way for other models, too. The Aspire R 13 convertible and Aspire S7 Ultrabook are both getting upgrades to fifth-generation Intel Core processors (aka Broadwell), which promises both more speed and extra battery life. Acer isn't divulging full specs at this point, but it's promising that both the Aspire R13 and S7 Ultrabook will get a healthy 10 hours of running time (up from seven to eight hours) if you're using a 1080p display; you can expect a bit less if you pick up either PC with a 2,560 x 1,440 screen. Both should be available around the world in January, and Acer will follow them up with a promised Core M upgrade to the Switch 12 tablet sometime early in the year.

In this article: acer, aspirer13, aspires7, blackedition, broadwell, ces, ces2015, computer, depth-sensing, depthsensor, intel, laptop, pc, realsense, v17, v17nitro, v17nitroblackedition, vnitro, windows
All products recommended by Engadget are selected by our editorial team, independent of our parent company. Some of our stories include affiliate links. If you buy something through one of these links, we may earn an affiliate commission.