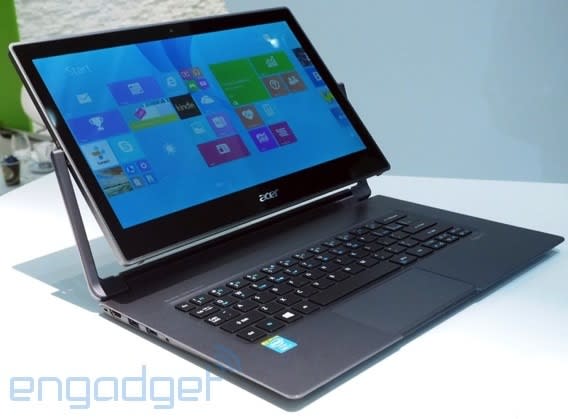 It takes a big company to admit it made a mistake. It also takes a big company to admit it copied its rival's design. Sure enough, Acer has done both of those things today, which makes the Taiwanese firm, we don't know, extra bold, or something. Here at IFA in Berlin, the company is showing off a redesigned version of its R-series convertible laptop, whose touchpad used to sit above the keyboard, but has now returned to a more normal spot. Meanwhile, Acer also announced the Aspire R14, a notebook with a 360-degree hinge that even Acer admits is similar to Lenovo's Yoga series. Starting with the R series (now called the Aspire R13), it has the same form factor as the original, which is to say it has an easel-like hinge allowing the screen to pop out and hover over the keyboard, kind of like an all-in-one desktop with an articulating screen. Now, though, the screen size is 13.3 inches, not 15.6, making it far more portable than the original. Additionally, of course, the touchpad has moved to a more natural spot below the keyboard. That, Acer says, is a concession to customer feedback; users apparently couldn't get used to having the trackpad at the top of the keyboard deck. Similar to the older R7, the R13 will come standard with 1,920 x 1,080 screen resolution, and will be available with an optional digitizer for pressure-sensitive pen input. Here, however, you'll also be able to get it with a 2,560 x 1,440 screen, just like Acer's high-end S7 Ultrabook. Under the hood, it runs your choice of Core i5 or i7 processors, along with up to 1TB of storage and up to 8GB of RAM. Battery life is rated at eight hours, assuming you have the 1080p display and not the higher-res one. Look for the R13 in October for $900 and up, with European and Asian availability to follow in November for €900.

Meanwhile, the Aspire R14 is basically the same "Yoga" design PC makers have been copying all year long: a 360-degree hinge that allows the screen to fold back into tablet mode (and tent mode, and stand mode...). Think we're being harsh? Even an Acer executive volunteered to us that the design is similar to Lenovo's line of convertibles. Truth be told, there isn't much different about the design here, except that the specs run a bigger gamut than what most other brands are offering. You can get it with an Intel Pentium processor, for instance, or you can go all the way up to Core i3, i5 and i7. Some of the higher-end models will also have discrete NVIDIA GeForce 820M graphics, an optional pen digitizer, up to 1TB of storage and up to 12GB of RAM -- something you won't find on a Lenovo machine. It's expected to go on sale in mid-October, starting at $600 here in the US and €500 in Europe. Dan Cooper and Ben Gilbert contributed to this report.