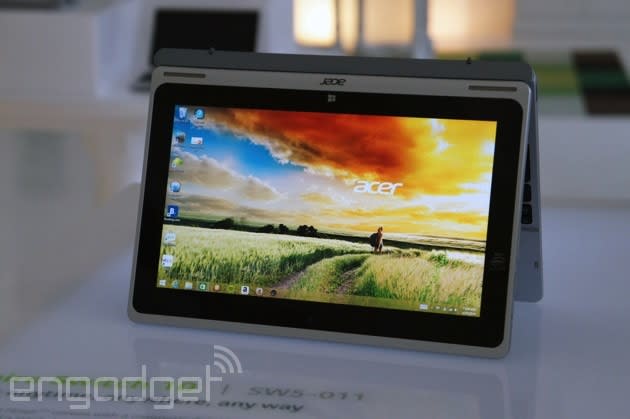 You gotta hand it to Acer for giving its products self-explanatory names. The company just announced the Aspire Switch 10, and it's pretty much exactly what it sounds like. Which is to say, it's a 10.1-inch Windows device that switches (get it?) from one mode to another. In particular, it's a tablet with a magnetic keyboard dock, allowing you to use it as a tablet, a clamshell laptop, or in one of two hybrid modes: "Display" (with the screen facing away) and "Tent" (upside down). In practice, then, it's kind of a cross between Lenovo's Yoga series and Lenovo's reversible ThinkPad Helix tablet. The big difference: it has a much lower-power processor than the Helix, and doesn't accept pen input. Even so, we suspect Lenovo's laughing somewhere. Though the dock has a pair of spiky anchors to guide the tablet in, it's mainly magnets holding the two pieces together. In my brief hands-on with it, I was surprised to find that, despite the otherwise cheap build quality, the tablet and dock do indeed click together seamlessly, with little effort required on the part of the user. At the same time, they're easy enough to pull apart when need be. As for the dock, it brings a full-sized USB port, microSD slot and a miniature HDMI port, and there will also be another dock with a built-in hard drive -- you know, in case the tablet's built-in 32GB/64GB of storage isn't enough.

Under the hood, it runs an Intel Atom Z3745 CPU, promising eight hours of battery life -- on the low side for a Bay Trail tablet. On the outside, you'll notice front-facing speakers -- placed so that the sound won't get muffled in any of the four positions. The display, meanwhile, is of IPS quality with Acer's "Zero Gap" bonding technique promising minimal glare. Indeed, the screen held up well in a mix of fluorescent and natural light, though that was all indoors, mind you -- none of the press here at Acer's New York City press event had the chance to test it outside. That's about all she wrote for now: Acer says the tablet will arrive in June for $380 but for now, we've added some hands-on photos toward the top of the post.

In this article: acer, aceraspireswitch10, aspireswitch10, switch10
All products recommended by Engadget are selected by our editorial team, independent of our parent company. Some of our stories include affiliate links. If you buy something through one of these links, we may earn an affiliate commission.