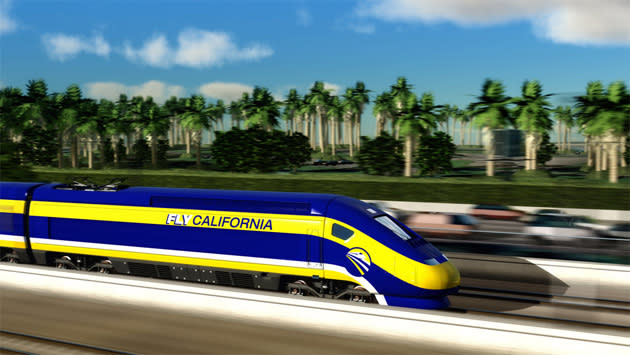 At long last, California's promised high-speed train system is becoming more than just a pipe dream. The state will break ground on the first section of track in Fresno on January 6th, creating the foundation for a 220MPH rail network that will eventually extend as far as Sacramento and San Diego. It'll be a while before you can take the train to most major cities, so don't start scheduling that vacation just yet. The first leg will be limited to the Central Valley to help with both early deployment and testing, and the initial expansion will focus on connecting the two biggest travel hubs, San Francisco and Los Angeles.

The rail system's construction is already problematic. Officials expect it to cost a staggering $68 billion when it's all done, and the need for convenient stations is poised to disrupt areas like San Francisco's Chinatown. However, the potential time and energy savings are huge. You'll ideally get from San Francisco to LA in three hours, or quickly enough that it would frequently make more sense to take the train instead of flying or driving. That, in turn, might clear up California's roads and skies, reducing both pollution and traffic congestion in one fell swoop.

In this article: bullettrain, california, CaliforniaHighSpeedRail, high-speedrail, high-speedrailauthority, high-speedtrain, rail, railway, train, transportation
All products recommended by Engadget are selected by our editorial team, independent of our parent company. Some of our stories include affiliate links. If you buy something through one of these links, we may earn an affiliate commission.