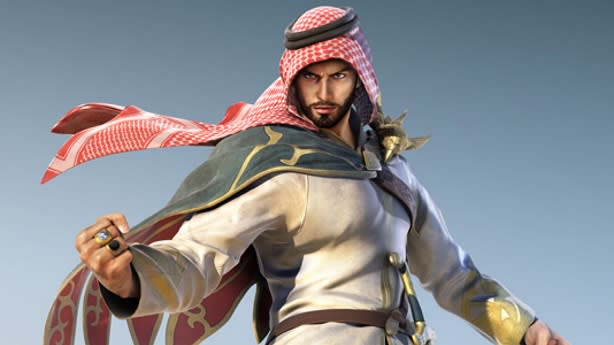 A Saudi Arabian fighter by the name of Shaheen will be joining the Tekken 7 roster, according to a tweet made earlier this week by game director Katsuhiro Harada. There's little other information to go on, but Harada also notes that Shaheen's design and name were "inspired by foreign student[s] from Arabic counties and [the] Saudi embassy."

If you're worried that negative reaction will keep Shaheen out of the West in the same way that the character Lucky Chloe was driven away, don't be; it turns out Harada was joking about that. Er, maybe. In response to Harada saying Lucky Chloe would be exclusive to EU and Asia regions and that he would make a musclebound skinhead for US players, an angry Twitter user turned out some harsh stereotypes of the Japanese. Harada responded with the following: "Many spammers/haters attacking us (That was an extreme prejudice and tons of dirty words. Of course I hate this happen), then I said just counter 'sarcasm/joke.'"

It's hard to tell if Harada means that he was only joking about American stereotypes or if the joke he's referring to is Lucky Chloe's supposed region exclusivity (the language barrier doesn't help). When another Twitter user called him a "silly goose" and thanked him for releasing Lucky Chloe, Harada tweeted a winking smiley face with its tongue sticking out. So ... yes?
[Image: Bandai Namco]
In this article: bandai-namco, Katsuhiro-Harada, lucky-chloe, microsoft, playstation, ps4, shaheen, tekken-7, xbox-one
All products recommended by Engadget are selected by our editorial team, independent of our parent company. Some of our stories include affiliate links. If you buy something through one of these links, we may earn an affiliate commission.