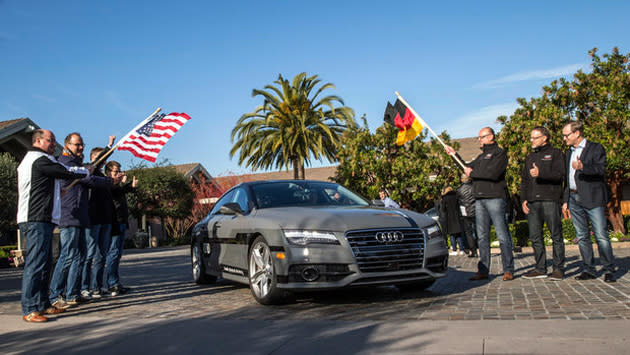 Audi is confident that its self-driving car technology is ready for prime time -- so confident, in fact, that it's about to give the platform a very public long-distance test. An A7 Sportback with the mostly autonomous hardware is traveling 550 miles from Stanford, California, to CES in Las Vegas, with trained members of the press taking turns behind the wheel. Not that they'll be doing much. The A7's cameras, lasers and radar will let it control highway driving so long as it's under 70MPH, and it'll only hand over the reins in "city environments" and other situations where it reaches its limits. This is a marketing stunt, to be sure, but it could show that autopilot systems are capable of taking over during long, monotonous trips.

Your pilot to #CES today is "Jack," an Audi A7 built with the latest automated driving technology. #DrivingNotDriving #Vegas

In this article: a7, a7sportback, audi, autonomous, car, ces, ces2015, self-driving, transportation, vehicle
All products recommended by Engadget are selected by our editorial team, independent of our parent company. Some of our stories include affiliate links. If you buy something through one of these links, we may earn an affiliate commission.