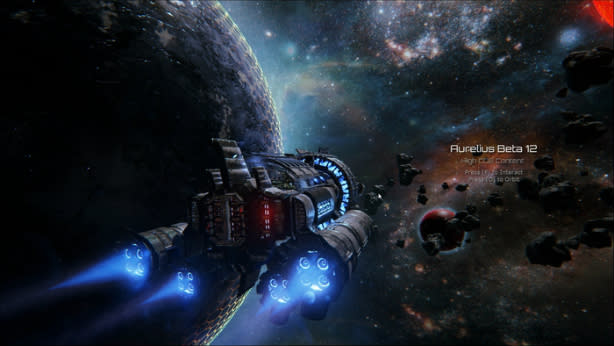 Ben Jones, previously lead designer of the Battlefield Premium service at DICE, and a team of former DICE, Capcom and Sony America developers have formed Fugitive Games, and their first project is an open-world space survival simulator called Into the Stars.

In Into the Stars, players are the captain of a ship exploring a huge solar system to find a new home for humanity. Players oversee the details of ship management, including choosing unique resources, modules and personnel to take on the journey. Into the Stars is single-player, it features crew permadeath, and it's in development for PC and Mac, running on Unreal Engine 4. The score comes from Jack Wall, the composer behind Mass Effect and Mass Effect 2.

Fugitive Games is seeking $85,000 on Kickstarter to build Into the Stars, and it's up for voting on Steam Greenlight. On the Kickstarter campaign page, Fugitive explains the decision to seek crowdfunding with the following message: "We've been involved in the Kickstarter community for several years now, so when it became clear that we required additional funds to complete this project, we knew just where to turn. The reality is that we simply can't provide the high level of polish, quality audio and compelling score this game demands with our existing resources. Though we could potentially turn to publishers to fill this void, we'd much rather deal directly with gamers like you who can help shape the experience into something truly special!"
[Image: Fugitive Games]

January 5, 2015 – SANTA MONICA, Ca. – Two former DICE leads, an established art director and a veteran designer from the Battlefield, Lost Planet and Shadows of the Damned games have combined to form Fugitive Games. Their first title, Into the Stars, is an open-world space survival simulation for PC and Mac built in Unreal Engine 4. Into the Stars features an original score from Jack Wall, the legendary composer behind the music of Mass Effect, Call of Duty and Lost Planet.
In order to secure finishing funds and truly serve fans of the space genre Fugitive Games have launched a Kickstarter campaign which can be found here: https://www.kickstarter.com/projects/fugitivegames/392502096?token=15a3ba42
WHEN GOING... INTO THE STARS
Take the role of Captain as you explore a massive solar system in search of a new home for humanity. Outfit your ship, hand pick your crew, and set off on a journey where you must scavenge resources, shelter civilians, and outrun a hostile alien force in order to survive.
Your ship, the Ark 13, is the last to leave our besieged planet, and you are at the helm. But before you set out, some decisions must be made: Which modules will you choose to take with you, and who will manufacture them? What resources will fill your limited cargo holds, and which crew members will you take under your wing?
Once in flight, your responsibilities as captain will push your limits: Monitor the condition of your crew, civilians and modules, ensure a steady flow of resources, and navigate celestial bodies – all while evading a pursuing enemy.
ABOUT THE GAME AND THE TEAM
Into the Stars incorporates elements from popular titles like FTL and Out There, where the struggle for survival in a hostile environment plays out much like a modern version of The Oregon Trail.
Fugitive Games, LLC was founded in 2014 by a group of crafty veterans from places like DICE, Capcom and SCEA to build games that focus on fun and community first. The team has worked on a range of products from heavy hitters like Battlefield, Medal of Honor and Lost Planet to cult hits such as Shadows of the Damned and MAG. Visit www.fugitive-games.com and follow @fugitivegames for updates.
In this article: Capcom, DICE, fugitive-games, Indie, into-the-stars, kickstarter, mac, pc, SCEA, space, space-sim, steam-greenlight
All products recommended by Engadget are selected by our editorial team, independent of our parent company. Some of our stories include affiliate links. If you buy something through one of these links, we may earn an affiliate commission.