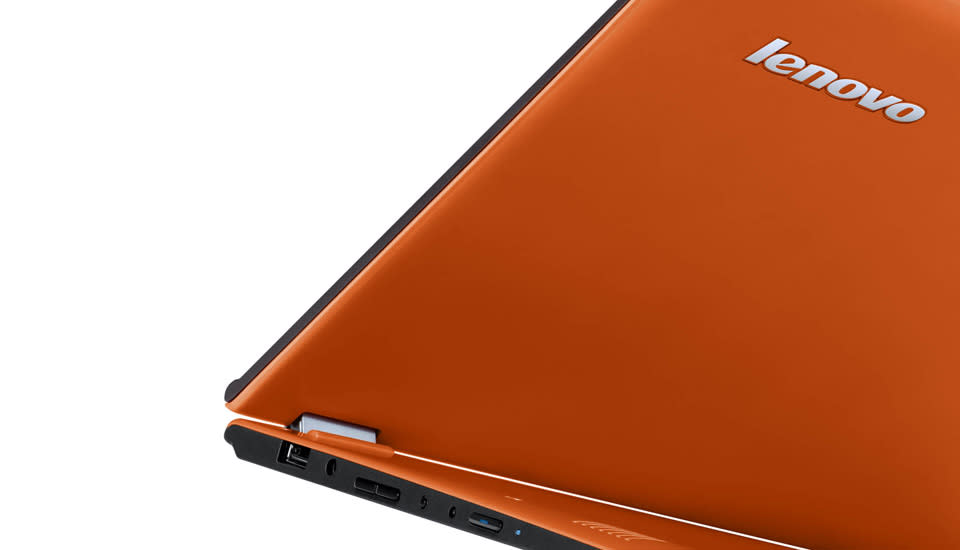 Not too long ago, Lenovo updated its high-end Yoga laptop with a much thinner, much lighter build. Now that the company's got its precious flagship taken care of, it's turning its attention to some of the mid-range models. The outfit just unveiled its 2015 Yoga lineup, which brings new size options, fresh processors and, in some cases, lighter designs.

Starting with the ones intended for everyday consumers, the Yoga 3 11 replaces -- you guessed it -- the Yoga 2 11, while the Yoga 3 14 is actually a substitute for last year's 13-inch model. Though the two have a similar design, complete with a bright orange color option, the performance is going to differ from one to the other. Whereas the 14-inch version runs on Intel's fifth-generation Core processors and can be configured with discrete graphics, the 11-incher makes use of a lower-powered Intel Core M chip, allowing for a thinner and lighter build -- just 2.64 pounds and 0.6 inch thick (down from 3.2 pounds/0.67 inch). Meanwhile, though the 14-inch version technically rocks a larger screen than its predecessor, it has roughly the same footprint and nearly the same weight: 3.5 pounds. Either way, both new machines come standard with a 1080p touchscreen and 802.11ac WiFi, and can be configured with up to 8GB of RAM and either an SSD (128/256GB) or a 500GB hybrid hard drive. Look for them this month, starting at $699 and $799, respectively.

In addition, Lenovo's showing off three new laptops in its business-oriented ThinkPad Yoga series. These include a replacement to last year's 12-inch model, as well as brand-new 14- and 15-inch sizes. As before, they have Lenovo's "Lift n' Lock" keyboard, which flattens out the keys as you flip it back into tablet mode. There's also still a pen option across all models, if you think you'll need it. So what's different? For starters, these all make the jump to Intel's new fifth-gen Core processors. There's also a discrete graphics option for the first time, but only on the 14 and 15. Finally, the 15-incher brings a depth-sensing Intel RealSense camera -- something still not offered on many laptops. These too will go on sale this month, with prices starting at $685 for the 12, $749 for the 14 and $875 for the 15. Finally, though not technically a part of Lenovo's Yoga line, the company's "Flex" laptops have also received an update. In particular, whereas they used to only be able to bend part of the way back, they now have the same 360-degree hinge as the Yogas, allowing them to be used in all four modes (Notebook, Tablet, Stand and Tent). In total, the lineup includes three models in 11-, 14- and 15-inch sizes, with the bigger two offering optional 1080p displays, fifth-gen Intel Core i5/i7 processors, and a choice between integrated and discrete graphics. (The 11-inch model runs on a lower-power Pentium CPU.) So in many respects, these basically are Yogas, except for one thing: The build quality isn't quite as nice. Also, they're heavier, at 3.08 pounds, 4.29 pounds and 5.07 pounds, respectively. The new Flex laptops go on sale in May, starting at $399 for the 11, $549 for the 14, and $579 for the 15.