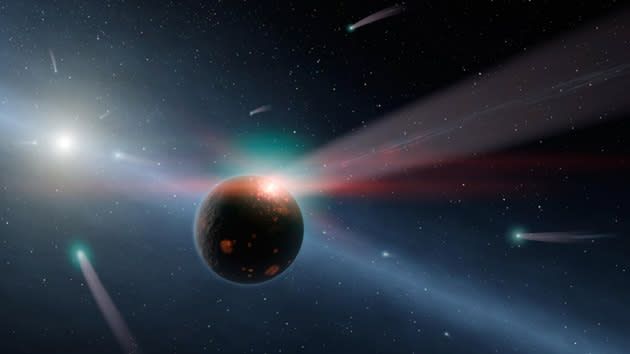 There are many things in space that can bring life on Earth to an end, whether they're wayward asteroids or the eventual death of our Sun. However, the chances of a calamitous event may well go up if the calculations of Max Planck Institute scientist Coryn Bailer-Jones are on the mark. He estimates that two orange dwarf stars, GL 710 and Hip 86505, could start messing with comet orbits as they approach our solar system. If they get close enough, their gravitational pull would send a torrent of comets our way and greatly increase the likelihood of an Earth-shattering kaboom.

Thankfully, you won't be around to see this doom-and-gloom scenario play out. Hip 85605 could take up to half a million years to arrive, and GL 710 may not show for 1.3 million. And that's assuming that the math holds up. Baller-Jones believes the probability of this comet chaos is high, but we'll have a better sense of the odds when the European Space Agency's galaxy-mapping Gaia satellite collects enough data to verify the theory. Even if it's accurate, the timing is relatively good news -- it suggests that humanity has time to develop interstellar travel and get out of Dodge before it's too late.

In this article: apocalypse, astrophysics, comet, comets, MaxPlanckInstitute, science, space, star, stars
All products recommended by Engadget are selected by our editorial team, independent of our parent company. Some of our stories include affiliate links. If you buy something through one of these links, we may earn an affiliate commission.