Smart pacifier tracks your babies and their fevers 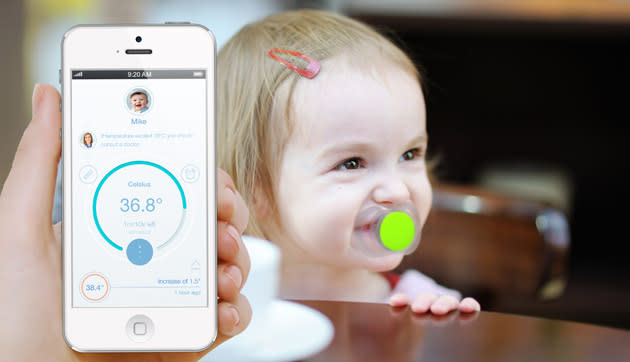 No parent likes to see their tyke battle a little sickness, only to have to exacerbate the little one's discomfort with constant thermometer probes. But what if temperature monitoring could actually be a soothing experience for the baby? Enter Pacifi, a child's pacifier with a thermometer built into its silicone teat and a Bluetooth chip that sends temperature readings to a paired smartphone. From within the Pacifi app for Android and iOS, you can view a live reading and see previous ones in a timeline graph, allowing you to track improvement or decline in the child's condition. This data can also be easily shared -- with your doctor, for example. And if your child happens to be on a course of treatment already, you can set dosing reminders from within the app, too.

Oral temperature readings aren't as accurate as other, more uncomfortable methods. That's why Blue Maestro, the makers of Pacifi, has included a calibration feature. You're advised to initially take two readings -- one with the pacifier and one with, say, an ear thermometer -- and correct any discrepancy manually. This offset value will then be added to any subsequent results for consistency. But taking a baby's temperature isn't the only thing Pacifi does. It also acts as a proximity monitor, sending a notification to the paired smartphone if your child tries to escape. If the pacifier moves out of the 30-meter range, the Pacifi app with make a note of the last known location using your phone's GPS, pointing you in the direction of your lost child or, hopefully, just a lost pacifier. And if you do misplace the thing, you can trigger a miniature siren that's built into it to help track it down.

For easy washing, the Pacifi is hermetically sealed, which also means you can't replace its battery. That shouldn't be too much of a problem, though, because it's expected to last between 12 and 18 months before running out of juice (based on a one-reading-per-day estimate). The Pacifi is currently up for preorder at £25/€30/$39, but as it's technically a medical device (just like the TempTraq Bluetooth thermometer patch), it won't launch in earnest until it's been given the green light by regional regulators. European approval is expected as soon as next month, at which point Blue Maestro will start the same process in the US, with an eye to launch at some point during the first half of this year.

In this article: bluemaestro, CES2015, pacifi, pacifier, thermometer
All products recommended by Engadget are selected by our editorial team, independent of our parent company. Some of our stories include affiliate links. If you buy something through one of these links, we may earn an affiliate commission.