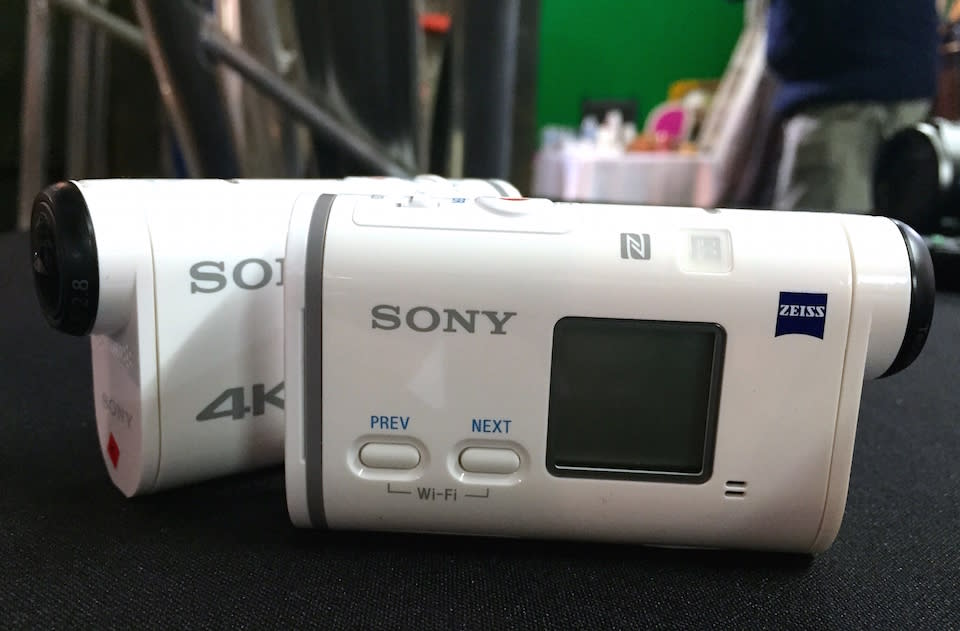 CES 2015 wouldn't be the same without Sony announcing new cameras. As such, the electronic giant is today revealing updated Action Cam shooters and Handycam camcorders. The main change is the addition of 4K to both lines, though there are still some models that will be limited to 1080p. Not surprisingly, those are going to come with a lower price tag than their higher-res siblings. For starters, there's the Action Cam FDR-X100V and FDR-AS100V, with the former being the one that supports 4K at 30 fps. Other than that main differentiator, both the FDR-X100V and FDR-AS100V feature a high-precision, ultra-wide-angle lens, Advanced SteadyShot (to help with stabilization), stereo microphones, manual settings and the ability to control your frame with a companion mobile app. Moving on, the Handycam FDR-AX433 and HDR-PJ670 are making their debut here in Las Vegas too. The AX433 is the model that comes with 4K shooting, alongside Balanced Optical SteadyShot and 4K photo capture. The HDR-PJ670, meanwhile, misses out on 4K, but does have Balanced Optical SteadyShot built in, a lens that's 26.8mm at its widest angle, 50 Mbps high-bitrate recording and the ability to livestream via Ustream.

In this article: 4K, Action Cam, ActionCam, CES, CES2015, FDR-AS100V, FDR-AX433, FDR-X100V, hands-on, HandyCam, HDR-PJ670, sony, Sony Action Cam, Sony Handycam
All products recommended by Engadget are selected by our editorial team, independent of our parent company. Some of our stories include affiliate links. If you buy something through one of these links, we may earn an affiliate commission.