Amplicity is a rentable graphics workstation the size of a smartphone 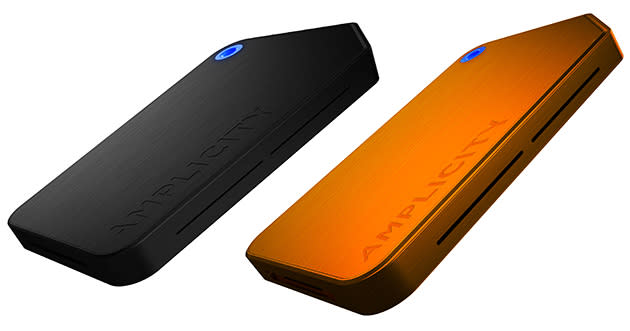 The sharing economy has mostly kept itself to AirBnb- or Uber-style rentals, but a company called The Hive is trying to extend the concept to graphics workstations with its "Amplicity Anywhere" pocket PC. It's the size of a large smartphone and loaded up with a suite of Adobe video and photo apps, priced at $99 for a six-month subscription. Once the subscription is up, you can renew it and turn in the PC for a new one. The device -- essentially an NIC with Adobe software -- caters to the "casual content creator," and is equipped with an Intel Atom M processor, 4GB of RAM and up to 128GB of storage. That would do the job (barely), but should it prove insufficient, there's another Amplicity device due later with more power, starting at $399.

The PC also comes with a terabyte of cloud storage and gives you the option of renting curved or flat 4K screens, plus workstation furniture like standing desks and computer workstations (yep). Though the whole idea sounds like the solution to a problem that doesn't exist, it was created by some industry heavyweights, including eMachines and Packard Bell founder John Hui. We guess it could be an option if you're trying to break into the film or graphics industries and don't have a lot of bucks for gear. The subscription-based Amplicity Anywhere pocket PC should be arriving this spring, and the higher-end unit coming shortly later in the year.

In this article: amplicity, amplicity anywhere, ces, ces2015
All products recommended by Engadget are selected by our editorial team, independent of our parent company. Some of our stories include affiliate links. If you buy something through one of these links, we may earn an affiliate commission.