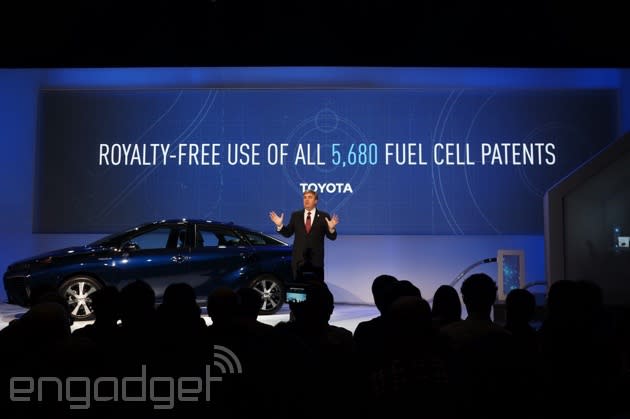 Toyota's apparently hedging it's bet in the hybrid world by also gambling on a hydrogen-powered future. In an apparent attempt to drum up some development support, all 5,680 or so of Toyota's FCV (Fuel Cell Vehicle) patents developed for and in support of the Mirai are being tossed out to the world for use royalty-free. Included are some 1,970 patents related to fuel cell stacks, 290 to high-pressure hydrogen tanks, 3,350 involving the software to manage the system and a further 70 for production and supply. The fuel cell patents around the actual cars will remain royalty-free until 2020, while the others around production and supply will stay royalty-free for an unlimited time.

Obviously with more partners on board (aside from those already prepped to join the game like Honda, BMW, Hyundai and GM) Toyota may hope to see new cars and infrastructure for fueling and hydrogen production grow to catch the electric world. Considering that an electric charging station can cost as little as tens of thousands of dollars, a hydrogen station rings in at $1 or $2 million. While Toyota's cars are just about here -- albeit only in California -- there's no denying that the consumer's primary barrier to access for hydrogen cars (before price of purchase) even in that state, will be refueling infrastructure. We're big on the concept and familiarity that hydrogen fueling and driving brings, but we think that tech still has a long road ahead and initiatives like this are what it needs to make that push stick.

In this article: ces2015, fcv, hydrogen, patent, supercharger, tesla, toyota
All products recommended by Engadget are selected by our editorial team, independent of our parent company. Some of our stories include affiliate links. If you buy something through one of these links, we may earn an affiliate commission.