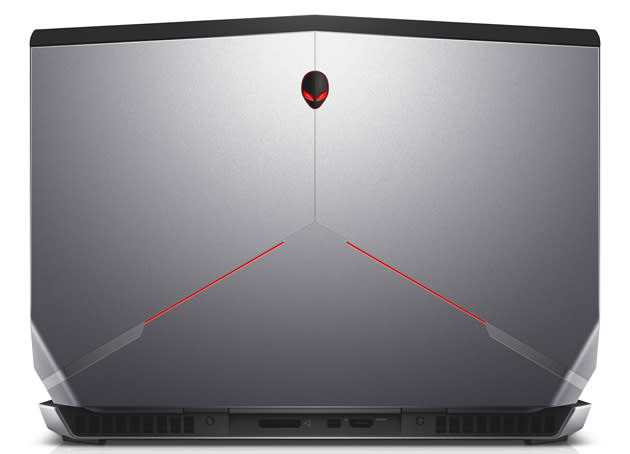 Last summer, Alienware unveiled a 13-inch gaming laptop. It was by far the thinnest and lightest machine the brand had put out in years -- and it was a helluva lot smaller than the Alienware 14 it replaced, too. Well, it looks like there was more where that came from: Dell just announced a slimmed-down version of its Alienware 17 notebook, along with a brand-new 15-inch system -- the first machine of this size that Alienware has offered in two years. What's more, the company is discontinuing its massive 18-inch model, confirming that as far as gaming laptops go, there really is such a thing as too big. Take a peek around the edges of these machines, and you'll see they hew to the same industrial design as recent Alienware laptops, most of which were announced about a year and a half ago. That means they're constructed from aluminum and carbon fiber, with customizable lighting zones everywhere from the keyboard to the touchpad to the glowing Alienware logo on the lid. The real difference is how much more compact they are. The 17-inch model is 25 percent thinner, at 1.36 inch thick, and 9 percent lighter, at 8.33 pounds. The 15-incher, meanwhile, tips the scales at 7.07 pounds and 1.34 inch thick. OK, so the Razer Blade these are not, but hey: We won't argue when gaming notebooks go on a diet.

Under the hood, both systems are offered with a mix of Core i5 and i7 processors (last year's Haswell chips), and an NVIDIA 980M GPU. If you get the 15-inch model, you can also choose AMD's new Radeon R9 M295X card, along with a 4K screen. In either case, though, these new systems have a proprietary port allowing them to work with Dell's $300 external graphics amplifier, which lets you tap into a desktop-grade GPU housed inside a large shell that lives on your desk. We always thought it was a neat idea, but until now, it only worked with the Alienware 13; it's nice, then, to see Dell making the amplifier compatible with more models in different sizes. Both are available today, with the 15-incher starting at $1,119 and the 17 going for $1,499 and up.

In this article: alienware, alienware 15, alienware 17, alienware 18, alienware15, alienware17, alienware18, ces, ces2015, dell
All products recommended by Engadget are selected by our editorial team, independent of our parent company. Some of our stories include affiliate links. If you buy something through one of these links, we may earn an affiliate commission.