Anova's Sous Vide Precision Cooker Pro is $200 off on Amazon 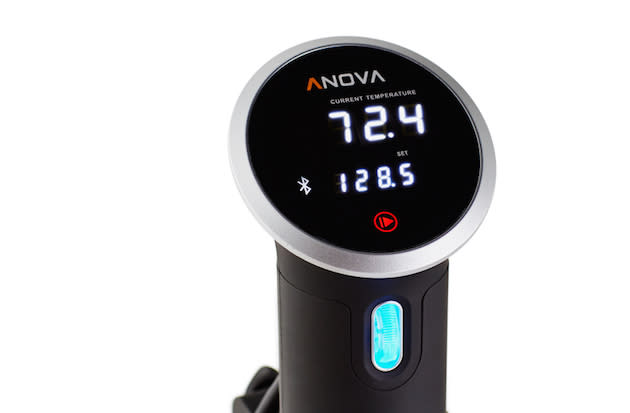 Affordable sous vide cooking has been around for a while now, what with devices like the Nomiku, the Sansaire and the Anova One gaining popularity in recent years. Anova, in particular, recently completed a successful Kickstarter campaign last year where they funded the Anova Precision Cooker, a handy wand-shaped immersion circulator that added Bluetooth into the mix. At CES 2015, the company is taking it one step further by announcing something called the Anova Touch, a sous vide cooker with WiFi as well.

Though it's not the first sous vide cooker to add WiFi, Anova representative Michael Tankenoff says that the Touch will still be the "best sous vide cooker for the home cook." Tankenoff showed us the Anova app at a Showstoppers event at CES, and demonstrated how he could remotely set the temperature of the Anova Precision Cooker via Bluetooth. With the WiFi version, Tankenoff hopes to do things like set a cook start and end time when you're away from home, or perhaps adjust the temperature of your slow-cooked ribs while you're in a meeting. He wasn't able to show us a working prototype of the Anova Touch, but he did show us the app with the Precision Cooker, seen in the lead image above, and it appears to work pretty smoothly. You could either set your own temperature, or you could go to a pre-set recipe (which Tankenoff says he sourced from renowned chefs like Ming Tsai) and simply select it in the app to have the cooker do all the timing and temperature-setting for you.

As for when the Anova Touch will come to market? Well, Tankenoff wouldn't say -- pricing is yet to be determined as well -- but he did say it'll likely be some time this year.

In this article: anova, anovaculinary, anovatouch, ces2015, showstoppers, wifi
All products recommended by Engadget are selected by our editorial team, independent of our parent company. Some of our stories include affiliate links. If you buy something through one of these links, we may earn an affiliate commission.