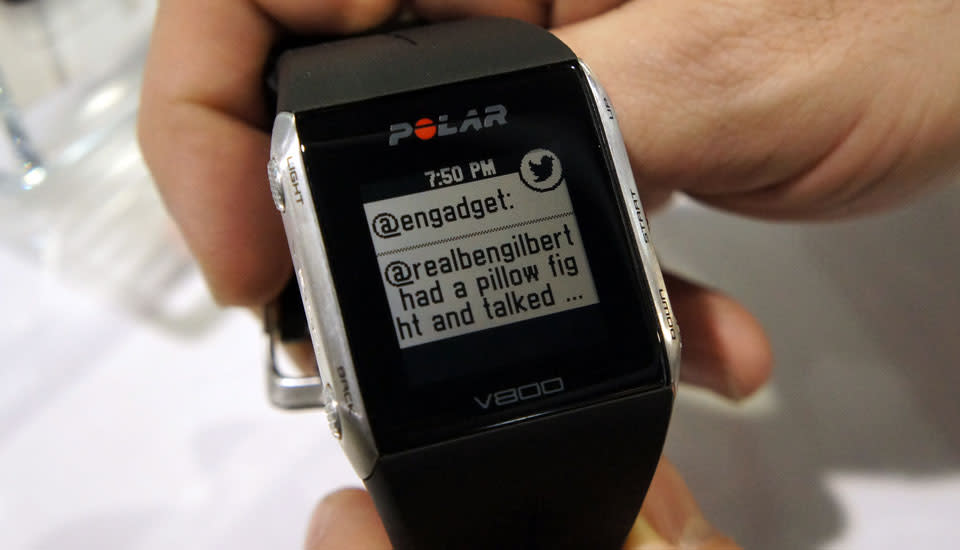 Twelve months ago, Polar announced the V800, a supremely powerful GPS running watch that came with built-in activity tracking. The standout feature, however, would be that the device would offer-up Pebble-esque smartwatch notifications. Unfortunately, the company didn't have the development resources to make good on its promises, so the latter feature was iced in favor of improving the watch's swimming features. A year later, however, and the company is finally ready to make good on its pledge.

Much like the famous e-paper watch so beloved by pretty much everyone, any notification that can appear as a banner on your phone's screen -- for instance tweets, emails and SMS -- will push over Bluetooth to the V800. In addition, users will also be able to answer or reject calls using the scroll up and down buttons on the right-hand side, and the watch will even vibrate. Since Polar is a fitness-focused company, however, it's also tweaked the software so that when you're out on a run or any other activity, every notification apart from incoming calls is suspended. The watch will even integrate with Google Maps and offer up text directions when you're running in a foreign land. It would have been useful here at CES, too, since the company has hired Olympic athlete Tim Don to do a triathlon across the cavernous LVCC.

The software update that enables the V800 to become a smartwatch as well as a fitness tracker will drop at some point in the first three months of the year. Now that the company is becoming more about the "platform," rather than individual devices, the features will then arrive on the M400, and possibly even the new A300 after that. There's no word (yet) on what that'll do to the V800's battery life, but we imagine that the figures will drop from the current rating, but even then, it's a small price to pay to only need one device on your wrist.

In this article: CES, CES2015, Notifications, Pebble, Polar, Smartwatch, Software, V800
All products recommended by Engadget are selected by our editorial team, independent of our parent company. Some of our stories include affiliate links. If you buy something through one of these links, we may earn an affiliate commission.