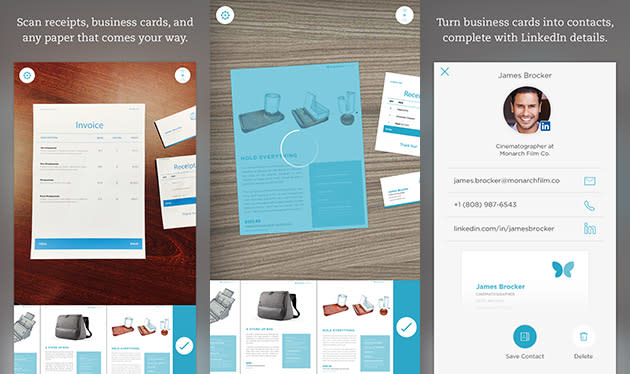 You likely already have a favorite scanner app if you regularly deal with documents outside the office. But in case you haven't found The One yet, there's one more contender to consider: Evernote's Scannable app for iOS. The company first announced it at Evernote's annual conference in October 2014. After going through a beta testing phase, it's now available for anyone with an iPhone or an iPad. Like similar programs, you can use it to scan anything by launching the app and pointing your device's camera at a document. According to Evernote, you don't need to press any button, since the app can automatically capture the paper and sharpen its contents, even if you're processing multiple pages.

You can then choose to email or text the digitized document, upload it to iCloud, share it via AirDrop, or save it to your Evernote account, where it becomes searchable. Business cards, on the other hand, are automatically associated with their owners' LinkedIn accounts and photos, assuming you're logged in. Finally, the app doubles as a controller for the ScanSnap Evernote Edition scanner, so you can quickly go through pages you need to process if, say, your office owns one. Evernote's Scannable is now on iTunes (some readers within and outside the US told us they can't access it -- we'll update this post once we've confirmed if it's a limited release)* though the company says it plans to develop versions for other platforms.

Update (01/08/15): An Evernote spokesperson told us there was an issue with the App Store earlier. Scannable is on iTunes now, and it's available worldwide for free.

In this article: app, evernote, mobilepostcross, scannable
All products recommended by Engadget are selected by our editorial team, independent of our parent company. Some of our stories include affiliate links. If you buy something through one of these links, we may earn an affiliate commission.