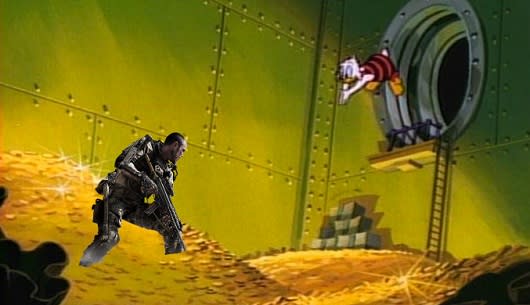 Activision's Xbox-sponsored Call of Duty Championship returns to Los Angeles across March 27-29, and 32 teams are once again doing battle for their share of the $1 million prize money. A new championship requires a new battlefield (wordage intended), so it's fortunate there is the recently-released Call of Duty: Advanced Warfare for this year's competitors.

If you and your friends think you've got what it takes, the championships are open to players both pro and non-pro (you're no amateur). You'll need to qualify first, though, and to do that you'll have to make it through online tournaments and live regional finals, all played on Xbox One. MLG.TV has further details here.

As for the main event, you can tune in live to the Championship's semi finals and grand final on Xbox Live, and the final's confirmed for "other broadcast partners" too.
[Image: Disney, Activision]
Show full PR text
FOR IMMEDIATE RELEASE

Semi-Finals and Final Match to Be Broadcast on Xbox Live on Sunday, March 29

Santa Monica, CA - January 8, 2015 - It's time to determine who is the best of the best as the third annual Call of Duty® Championship, presented by Xbox tournament will bring the top Call of Duty® eSport athletes in the world to Los Angeles, March 27 - 29, in the definitive Call of Duty competition. Activision, Sledgehammer Games and Xbox, in partnership with Major League Gaming (MLG) and additional international eSports partners, will play host to 32 of the best Call of Duty teams from around the world, as they compete in Call of Duty®: Advanced Warfare and the rights to be called the Call of Duty "World Champions," and ultimately claim the lion's share of the tournament's $1 million prize purse in the crowning contest where Power Changes Everything.This year's tournament will include a variety of compelling programming covering the weekend's non-stop excitement and hard fought matches, with the final match live streamed on the Xbox Live online entertainment network and other broadcast partners for the world to experience in real time.

"From Day 1, the team at Sledgehammer Games set out to bring a new way to play Call of Duty multiplayer to fans. We couldn't be more thrilled of how the competitive community has embraced and mastered the new player movements and game modes of Advanced Warfare," said Michael Condrey, Co-founder and Studio Head, Sledgehammer Games. "This is posed to be one of the most exciting Call of Duty competitive seasons with the Call of Duty Championship being one of the best eSports tournaments of the year."

Glen Schofield, Co-Founder and Studio Head, Sledgehammer Games added: "We developed Advanced Warfare with the competitive community in mind, and we can't wait for the top talent from around the world to compete in the Call of Duty Championships."

Call of Duty: Advanced Warfare drops players into an adrenaline-filled multiplayer experience, allowing fans to take the exoskeleton and its array of special abilities online. A first for the franchise, the power of the exoskeleton introduces all-new ways to maneuver combat situations on the ground and in the air, alongside an arsenal of futuristic weapon technology that gives players more ways to take opponents on, all while maintaining the signature breakneck Call of Duty multiplayer feel. In addition, Call of Duty: Advanced Warfare's robust in-game eSports offering allows fans to compete the same way the pros do.

The best Call of Duty teams from five continents, covering Asia, Australia, North America, South America and Europe, will contend for their place in Call of Duty history at the Call of Duty Championship, presented by Xbox tournament in a range of qualifying events hosted by eSports organizations. Qualifying for the Call of Duty Championship, presented by Xbox will be handled through online tournaments played on Xbox One, the all-in-one games and entertainment system from Microsoft, and broadcasted on MLG.tv, with select live regional finals taking place February through early March in Australia, Brazil, the U. K. and the U.S. The regional finals will be played on Xbox One and will also be broadcasted live on MLG.tv and additional broadcast partners.

Published by Activision Publishing, Inc., a wholly owned subsidiary of Activision Blizzard (Nasdaq: ATVI), Call of Duty: Advanced Warfare is developed by Sledgehammer Games and Raven Software specifically for Xbox One, the all-in-one games and entertainment system from Microsoft, PlayStation®4 and PC, and is available via direct digital download. A current gen version for Xbox 360 games and entertainment system from Microsoft and PlayStation®3 computer entertainment system is developed by High Moon Studios. The title is rated M for Mature with Blood and Gore, Drug Reference, Intense Violence and Strong Language.