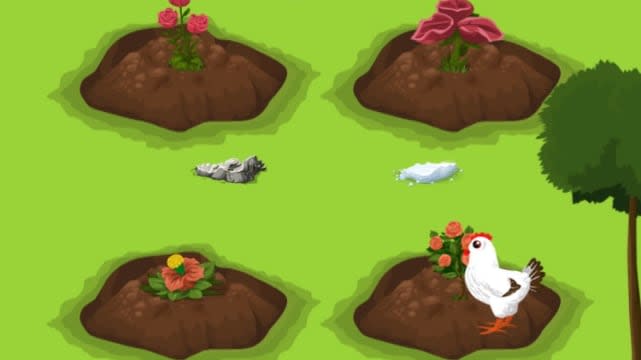 Chicken Recall is a free game that requires good memory and concentration. In an typically peaceful green pasture, a fox comes along and steals the chicken's eggs. As part of the game, it buries them in various piles, which expand into larger rows and columns as the game progresses. As the chicken, you must retrieve your eggs by focusing on where the fox buries them and remembering which pile the egg is in by the time you catch up. The title is available for iPhone and iPad.

Chicken Recall reminds me of a classic arcade game that could in theory use a joystick as a controller, or a fun mini-game as part of a full video game. It comes with three playing modes: Classic, Timer and Guess It. Classic is the default mode and the only one that's unlocked from the start.

The game plays a quick introduction video explaining that the fox has stolen the chicken's eggs, then instructions on how to play to get the eggs back. At the start, there are four rows of dirt piles and two per row, but the grid slowly expands The fox hops around between the columns and it's up to you to remember where it goes burying the egg. Bear in mind that the fox is at the top of the screen before you even get to start, so it's not as simple as just following in the fox's footsteps. It's time to put that cerebral cortex to work. In Timer mode, Chicken Recall gets a bit more complicated as you have to dig through the piles at a faster rate to keep up with the fox before it escapes, otherwise the game ends. Luckily, the only mechanism necessary in any of the modes is just tapping, so it's quick to speed through. In Guess It mode, the fox isn't even visible so you're forced to just guess which pile holds the egg until you're wrong. This mode is truthfully pointless.

Timer and Guess It modes are unlocked via an in-app purchase for US$0.99 that also removes ads or by sharing the game with your friends on Facebook, the latter of which I suspect to be the more popular option. The upgrade price is still inexpensive enough though.

Chicken Recall is also flexible in that it allows you to customize the game by tapping "Customize" on the menu screen. Set the starting number of holes per row, the maximum number of holes in a row and how many correct answers it takes to progressively increase the number of holes. It's great for fine-tuning and challenging yourself if it becomes too easy or if you have supernatural memorization capabilities. The graphics are a bit amateur, but it's easily overlooked. I also wish the introduction video and instructions didn't display every time you play the game.

It's an entertaining and distinctive memory game with plenty of customization options. The in-app purchase is a worthy upgrade for the price, but even otherwise the free portion of Chicken Recall is perfectly fine on its own. Find the app for iOS in the App Store.

In this article: app, arcade, games, gaming, iOS, memory, review
All products recommended by Engadget are selected by our editorial team, independent of our parent company. Some of our stories include affiliate links. If you buy something through one of these links, we may earn an affiliate commission.