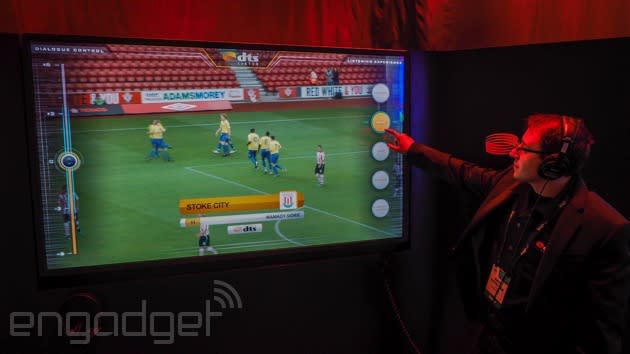 Compared to other trade shows (E3 being the prime offender), the Consumer Electronics Show floor is relatively quiet. That didn't stop the folks at DTS from showing off their new DTS:X codec however. It separates audio into objects instead of channels so instead of say, left, right, front, rear, center and subwoofer, you get things like dialogue or individual gunshots. If this sounds like Dolby Atmos tech, that's because it's pretty similar. The neat trick with DTS:X, however, is that it separates dialogue into its own thing that you control the volume of independently from everything else. Should you have an A/V receiver, you could always bump the center channel up a bit, but that increases the volume of all sound coming from that speaker, not just what the people onscreen are saying. It sort of achieves the same result, but not quite.

But let's face it: Not everyone has a receiver and surround sound setup. DTS:X works with your TV's built-in speakers as well, and the outfit showed that off with a giant touchscreen display like the one you see above. The left side offered a slider for adjusting dialogue volume and the right had different listening presets that you could change on the fly. Watching a football soccer match, for instance, I was able to change between home and away teams, sideline mics, the broadcast announcers or even alternate languages.

On paper, it sounds gimmicky as all get-out, but in use it's actually really worthwhile. Not every Blu-ray or TV show has the best audio mix and this presents a real solution that could benefit practically anybody -- not just the folks with dedicated surround sound systems. DTS promised more information come March, but for an idea of how it works right now check out the Vine below.

In this article: CES, ces2015, dialogue, dts, dtsx, HandsOn, hd, hdpostcross, volume
All products recommended by Engadget are selected by our editorial team, independent of our parent company. Some of our stories include affiliate links. If you buy something through one of these links, we may earn an affiliate commission.