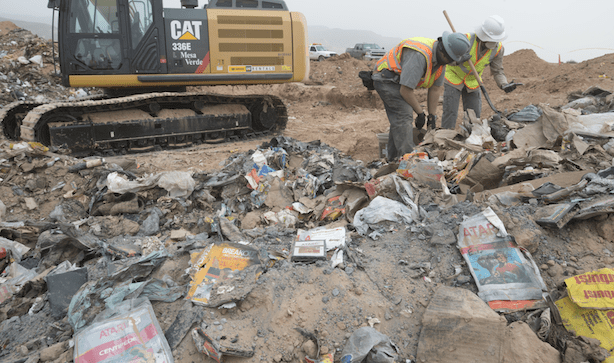 University of North Dakota's Special Collections department now houses a cartridge of the Atari 2600 game Centipede, dug up from a landfill in New Mexico last year. Assistant professor of history Bill Caraher participated in the dig and threw down $60 to buy the cartridge on eBay.

"While I usually would not condone purchasing archaeological artifacts of any kind, these artifacts are somewhat different because they represent our very recent past," Caraher told the AP. "When I saw that the Smithsonian had received a game and several other major cultural institutions as well, I had to acquire one for UND to commemorate the university's participation in this unusual excavation."

The Centipede cartridge marks an important moment in video game history – the crash of the industry in 1983. That year, Atari reportedly dumped truckloads of unsold copies of ET, Asteroids, Missile Command, Centipede and other games in the New Mexico landfill, and in 2014 a documentary team set about excavating the old, dirty games. Microsoft helped finance the excavation and the documentary Atari: Game Over, which explores the 1983 crash and subsequent landfill dig. Atari: Game Over premiered on Xbox in November.

Once on eBay, the games sold individually for $50 to $1,500. The Smithsonian Institution in Washington, DC, picked up a copy of ET last year for its video game history collection. The University of North Dakota plans to invite people who participated in the excavation to a showing of Atari: Game Over in the spring, for a discussion of archaeology, media and video games as artifacts.

In this article: alamogordo, alamogordo-landfill, archaeology, Atari, atari-2600, atari-game-over, documentary, history, landfill, new-mexico, university, university-of-north-dakota
All products recommended by Engadget are selected by our editorial team, independent of our parent company. Some of our stories include affiliate links. If you buy something through one of these links, we may earn an affiliate commission.