Business card with built-in ECG is perfect for cardiologists 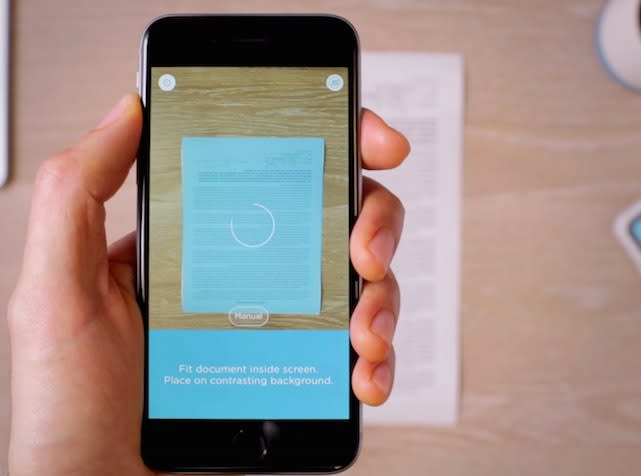 It's been a year since Evernote's Phil Libin (a/k/a TUAW's favorite CEO) responded to user criticism by vowing to double down on the quality and performance of the "outboard brain" cloud app's core functionality. Despite the occasional misstep, the company's managed to improve the basic Evernote platform while continuing to introduce new features, apps and brand extensions -- including a partnership with LinkedIn, expanding the Evernote Market and delivering all-new versions of the Evernote app for both the Mac and for iOS 8.

Now the elephant factory has pushed its latest mobile app out of beta and into production. Scannable for iOS delivers quick and easy scanning to Evernote with a minimum of configuration. Whether you're snapping Post-It notes or capturing business cards, Scannable is intended to make it as fast as possible (and get it all into Evernote, of course).

When you launch the Scannable app, the camera immediately begins looking for a "document" -- something vaguely rectangular that stands out against the background. As soon as it finds the edges and you hold still enough, a round countdown icon appears over the highlighted document onscreen; then, poof, it's scanned and saved. No shutter button needed! A simple timeline of past scans shows up for you to approve, share, export and upload as required, but you can set Evernote upload as the default/automatic action and the app will simply push your scans to the service.

The edge detection, cropping and deskewing that Scannable does is quite impressive. I'm a fan of powerful document scanner apps like Jotnot which allow you to manually define the edges of a document, turning a rhombus into a nice rectangle; Scannable simply does this on its own, with no real intervention needed. Sometimes if there's a particularly dark top or bottom edge on a document it might overcrop a bit, but in most cases it's spot on. If a specific document proves too baffling for the edge checker, you can switch into manual targeting mode to capture whatever you need.

Scannable goes beyond the iPhone's camera with its ability to remote-control the US$495 ScanSnap Evernote Edition sheetfed desktop scanner (a rebranded version of Fujitsu's well-reviewed ScanSnap iX500). If the phone and the scanner are on the same Wi-Fi network, you can walk up to the scanner, scan and then work with the results on your phone. I didn't have the chance to try out this feature, but in an office equipped with a ScanSnap EE it certainly seems like it would be a pleasant addition.

The killer use case for Scannable, in my brief testing, is business card scanning. The last app I used consistently for scanning cards was LinkedIn's CardMunch, which shut down in May of last year (roughly simultaneous with Evernote's deal with LinkedIn). Now, by connecting a LinkedIn account to the Scannable app, you can power through a stack of business cards in seconds, with solid OCR and a very good hit rate for contacts connecting to their LinkedIn profiles. Evernote's standalone Hello app (for keeping track of who you meet and when you met them) does one-off business cards reasonably well, but Scannable is much faster for a bulk scanning job after a trade show or day-long meeting. Once they're scanned, it's one tap to save them into your iPhone's Contacts list.

With Hello, Food, Skitch and the flagship Evernote app all offering various scanning capabilities into the Evernote ecosystem, not to mention all the third-party apps that support Evernote as a destination, users have nothing but choices when capturing a whiteboard, flyer or business card. Scannable's value is the streamlined, single-tasker approach it takes to getting things captured quickly and in a near-touchless manner. For that, it deserves a try-out spot on your homescreen.

In this article: business card, evernote, iOS, iPhone, ocr, scan, scannable
All products recommended by Engadget are selected by our editorial team, independent of our parent company. Some of our stories include affiliate links. If you buy something through one of these links, we may earn an affiliate commission.