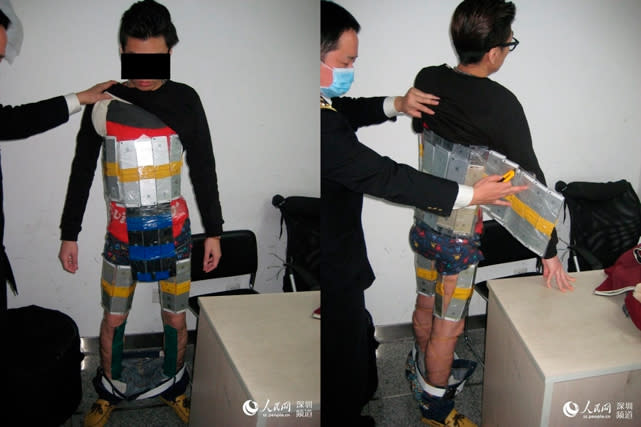 It's one thing to try to sneak a single prohibited item past customs when traveling -- don't do it, obviously, ever -- but it's another to try to get away with smuggling an entire Apple Store's worth of iPhones into a country using only your body. That's what officials at China's Futian Port discovered when they turned their attention to a man who had just arrived from Hong Kong, and was behaving strangely.

The poor fellow apparently couldn't walk correctly, and appeared to be in some sort of distress. When officials scanned him they immediately saw the problem: iPhone body armor. When they asked him to remove his sweatshirt they discovered he was wearing dozens of iPhones around his abdomen, strapped to his thighs, and taped all the way down his legs.

Hong Kong is well known as a hub for black market electronics, and had the man been able to successfully get all 94 iPhones into China their sale would have produced a nice chunk of change.

In this article: china, hong kong, iphone, law, news, Sina, smuggler
All products recommended by Engadget are selected by our editorial team, independent of our parent company. Some of our stories include affiliate links. If you buy something through one of these links, we may earn an affiliate commission.