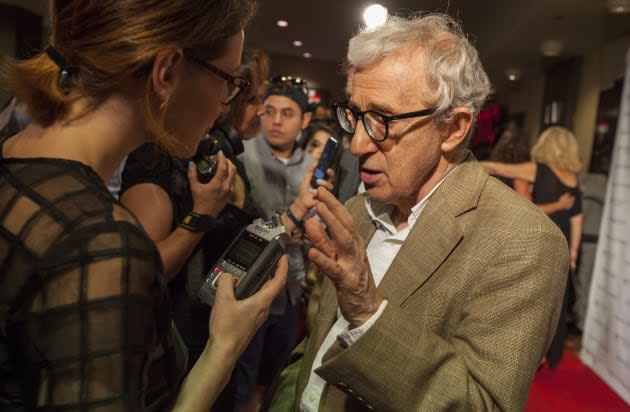 Even Woody Allen is getting into the streaming content game. The prolific writer and director has scored a deal with Amazon Studios to produce his first-ever television series. Unfortunately, there's no word on a title, casting, or even what the heck the series is going to be about. But we imagine there'll be plenty of idle chatter and an overwhelming sense of ennui. Amazon says Allen will write and direct the half-hour show, and it'll premiere on its Prime video service next year. Ever the professional, Allen seemed prepared for the challenge of television in a statement: "I don't know how I got into this," he said (and yes it's real). "I have no ideas and I'm not sure where to begin. My guess is that [Amazon Studios VP] Roy Price will regret this."

Of course, Allen is downplaying his freakish ability to pump out a new film every year for the past few decades. He's likely got plenty of ideas that never quite fit into the format of a single film. Signing Allen is also a surprising move for Amazon, as he's still dealing with the fallout from some nasty sexual abuse allegations from his adopted daughter Dylan Farrow. It's certainly Amazon's biggest get yet, but just like with Netflix's cancelled Bill Cosby special following his career implosion, there's a chance that further controversy may kill the project outright.

In this article: amazon, Amazon Studios, hdpostcross, Prime Instant Video, Woody Allen
All products recommended by Engadget are selected by our editorial team, independent of our parent company. Some of our stories include affiliate links. If you buy something through one of these links, we may earn an affiliate commission.