US charges Chinese nationals with laundering cryptocurrency for North Korea 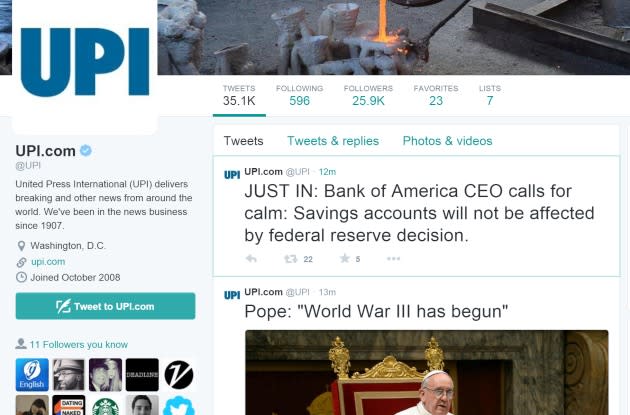 No, the Pope has not announced the start of World War III (of course, if someone says something bad about his mother then all bets are off), but that news did go up in the last few minutes on Twitter from the New York Post and UPI. Both accounts have apparently been compromised and the hackers took advantage of the situation by posting fake news concerning not only military events, but also a supposed Federal Reserve emergency meeting and bank holiday.

Just last week the Pentagon's social media accounts were taken over, but these tweets suggest the hackers were looking to nudge financial markets, and haven't suggested any link to ISIS or other groups. At the moment, the fake tweets have been deleted from @NYPost, but the @UPI account is still looking a bit fishy. The New York Post tweeted confirming the hack and says it's investigating -- in the meantime if you see any weirdness from @Engadget you can just blame it on post-CES flu.

In this article: hack, nypost, reserve, stockmarket, twitter, upi, worldwariii
All products recommended by Engadget are selected by our editorial team, independent of our parent company. Some of our stories include affiliate links. If you buy something through one of these links, we may earn an affiliate commission.