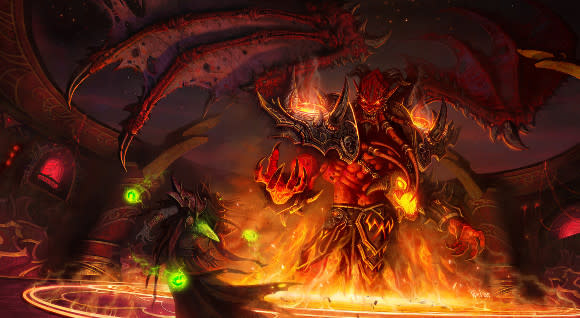 Sigh you guys and girls. So many comments as haikus. I can't facepalm more.

I'm trying to do the quest to open the mine on my horde character, but every time I try I'm unsuccessful. I have noticed that the Goren outside the mine are hostile, unlike on my alliance characters which were neutral. The grunt I need to save dies while I'm trying to get to her and fight off about 5 Goren, with more coming from the mine while I'm there. Does anyone have any suggestions for me?

A few things. First and foremost, make sure that you're using a ranged pull and not taking on more mobs than necessary. Iv'e done that quest a few times, and unless something has changed in the last couple months, I never fought more than two or three at a time.

Second, don't be afraid to use your cooldowns. I've found that they can often be quite necessary when leveling up, particularly if your gear is deficient in someway. I know a lot of old school people don't want to use them during level, or have a mindset that "they're only for raiding," but in reality they're part of your toolkit and should use them.

QftQ: I'm struggling to get my followers ilvl to increase. Is there a quick and easy way of getting the upgrade tokens?

Te best way to upgrade your followers iLevel is to just run tons of missions when your followers are level 100 with the salvage yard upgraded to level 3, and then to have the war mill constantly running. I clear the available mission list every single time if I can. I don't worry about assigning a follower to the wrong type of mission either -- if it's a 50% success rate, then it is. I just want there to be more salvage boxes to open, which themselves have about a 20% chance of a follower upgrade item (I've found). When selecting which missions to run, I prioritize missions that reward follower items to make sure that they've always got a 100% success rate.

With all that, I usually end up getting 5 to 7 upgrade tokens a day, which has been enough. I think the drop rate from the salvage boxes can be increased a bit, but it's not bad by any means.

Question for the queue
Chance of burning legion raid?
Archimondes not dead

I think so. I just get the feeling that the burning legion is on the docket for something major, and that we'll see them soon. Either in a major patch this expansion or as the central big bad of the next expansion. There's always been a lot more to explore with them, and I'm pretty excited to see where the story can go.

Morning a new day
Another queue to haiku?
What will Adam do?