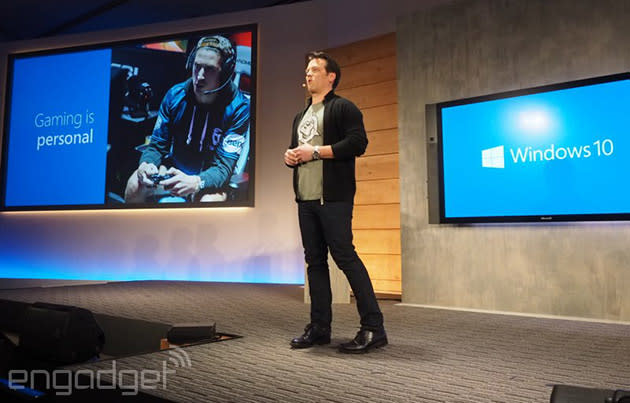 In what could go down as one of the most important Microsoft events of recent years, the tech giant invited people to its Redmond, Washington, headquarters to break down the next version of Windows. As part of this, Microsoft just revealed that Windows 10 will bring the Xbox app to every PC and tablet running on the new OS. Head of Xbox Phil Spencer took the stage to announce how system-level Xbox One features, like messages and the friends list, will integrate with Windows 10. "Gaming has become a much more social activity," said Spencer during the presentation. "Gaming is personal." With that in mind, the Xbox app on Windows 10 will let you do things like interact with the Activity Feed, right from your desktop, laptop or tablet. Furthermore, the Xbox app is completely platform-agnostic -- it can list Xbox and Steam games alongside each other, which is great news for those of you who own titles on multiple platforms. The new game DVR feature, meanwhile, lets you capture and edit footage on your Windows 10 device (sans smartphones), in similar fashion to what can already be done on the Xbox One.​

Spencer added that DirectX 12 is now the graphics subsystem here, making the overall experience smoother and lowering the power consumption by half. Unity, for its part, is joining other major gaming engines in adopting DirectX 12. Better yet, Windows 10 is set to bring support for cross-platform play with Xbox One. For example, Spencer showed a live demo of Fable Legends in which he was using a Windows 10 PC and playing the game with a Lionhead Studios representative who was on an Xbox One.

But that's not it.

Sometime "later this year," you'll be able to stream Xbox One games to any Windows 10 PC. To demonstrate this, the Xbox chief played Forza Horizon 2 on a Surface Pro 3 and brought up the Xbox One's user interface on the hybrid laptop/tablet. "While Xbox is coming to Windows, Windows 10 is also coming to Xbox One," said Spencer. "I don't think you're going to see millions of people using Excel on the Xbox." Still, he says that his team is going to treat Xbox gaming on Windows 10 "with as much passion."

That's all we know for the time being, but we're told to expect more stuff at the Game Developers Conference in March.

In this article: hands-on, hdpostcross, Microsoft, Windows 10, Windows10, windows10event2015, xbox, XboxOne
All products recommended by Engadget are selected by our editorial team, independent of our parent company. Some of our stories include affiliate links. If you buy something through one of these links, we may earn an affiliate commission.