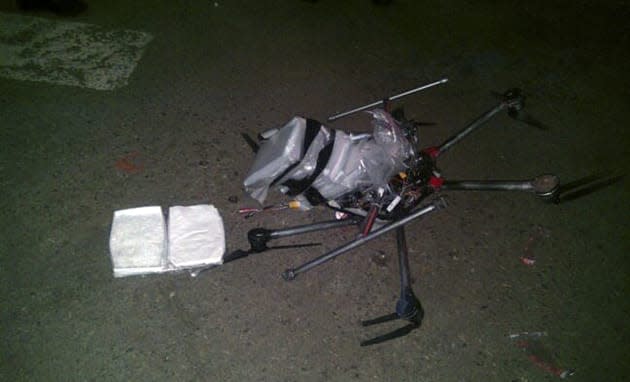 A quadcopter hexacopter has recently crashed into a Mexican supermarket parking lot located somewhere near the country's California border, and one of the possible reasons is that its payload was just too heavy for it. No, it wasn't carrying cameras or even fertilizer: it was loaded with meth. More than six whole pounds of methamphetamine, to be precise, piled and taped on top of the poor six-propeller drone-turned-drug-mule. Authorities are still investigating where the package came from, where it was headed and which real-life Walter White had the not-so-brilliant idea of strapping too much drugs to a small flying contraption.

According to Tijuana police spokesperson Jorge Morrua, this isn't the first time they've seen a drone used to deliver drugs. Something similar happened in South Carolina last year, as well, when a drone carrying weed, cellphones and cigarettes was caught outside a prison fence. Then again, we probably shouldn't be surprised: after all, drones can fly and carry payload in the process, making it a feasible option for ferrying illegal substances across fences and borders.

In this article: drone, law, meth
All products recommended by Engadget are selected by our editorial team, independent of our parent company. Some of our stories include affiliate links. If you buy something through one of these links, we may earn an affiliate commission.