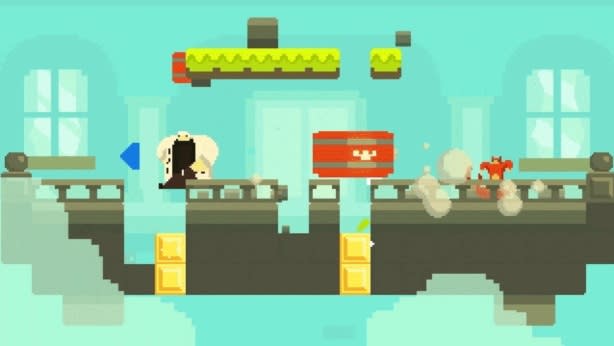 Checking into a hotel can be stressful. Even if your overnight establishment of choice doesn't lose or otherwise muck up your reservation, what if you don't have a reservation in the first place and there's no vacancy? And then, there are the hotels that force you to do battle with your fellow room-seekers, tossing exploding luggage and tearing the room apart in an effort to make them fall to their death.

What, you've never had that happen? Clearly you haven't played Check-in, Knock-out. But you should.

Check-in, Knock-out is a competitive local multiplayer game with a simple premise: you have been checked into a hotel room with three other people, and you must fight for the right to a restful night's sleep by throwing pieces of the scenery at your enemies in an effort to knock them out of said room. Simple, right?

Oh, and you all have superhuman abilities. One character can fly, one can control thrown objects mid-air with his mind, one can carry twice as much as other characters, and one turns any thrown object into an explosive. With these unique powers in play, experiencing Check-in, Knock-out at PAX South felt like an extremely fast-paced distillation of Nintendo's Super Smash Bros. formula, albeit in low-res pixel art form. Players leapt about the stages and shuffled their low-res feet in an effort to bob and weave between thrown items while simultaneously trying to aim their own projectiles at each other, with each collision sending the target flying explosively off-screen. Bouts lasted mere seconds and new rounds (with new levels and new props to throw) began immediately, making it easy to stay engaged. Even if you're the first to get knocked out, it's not upsetting to wait for a new chance to fight.

Check-in, Knock-out is in development by Lionade Games, a student team from the Hilversum School of Arts in the Netherlands, and published by tinyBuild Games. It's expected to arrive on Steam and consoles (tinyBuild booth attendants did not specify which) this summer.
[Image: tinyBuild Games]
In this article: check-in-knock-out, lionade-games, pax, pax-south, pax-south-2015, pc, tinybuild-games
All products recommended by Engadget are selected by our editorial team, independent of our parent company. Some of our stories include affiliate links. If you buy something through one of these links, we may earn an affiliate commission.