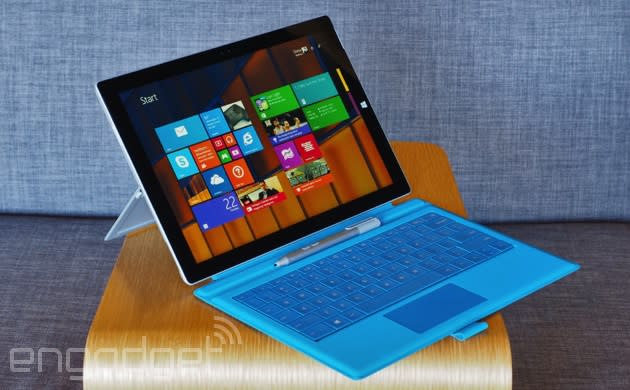 Microsoft appears to be well past the days when it was writing off unsold Surface tablets and struggling to match Sony in game console sales. The Windows developer reports that its Devices and Consumer group's revenue grew 8 percent year over year in the last calendar quarter of 2014, thanks in no small part to healthy Surface and Xbox sales. It's not revealing shipment numbers for the Surface, but it notes that revenue for the slate computers shot up 24 percent versus a year earlier, thanks in no small part to the Surface Pro 3.

The company also notes that it sold 6.6 million Xbox systems during the holidays -- down from last year, but still healthy. Microsoft unfortunately isn't breaking that down by model. However, there's no doubt the Xbox One turned a corner this fall through aggressive discounts and a better game selection -- from all indications, the new system represented a significantly larger chunk of sales. Sony was quick to say that it sold 4.1 million PlayStation 4s just during the last month of holiday shopping, so it's apparent that there was at least a fierce fight between current-generation platforms.

It's otherwise a mixed quarter for the Redmond crew. The company posted a rare net operating loss of $243 million, although you can largely chalk that up to the costs of both its massive restructuring plan and integrating Nokia's former mobile team. Windows licensing revenue is down 13 percent year-over-year thanks to both an unforgiving PC market and free Windows licenses for small devices, but that's offset by the company's continued successes in cloud efforts, such as Bing search and Azure. It also sold a respectable 10.5 million Lumia phones, turning around declines under Nokia's tenure. In short, Microsoft is still transitioning away from an old-school strategy where Windows sales reign supreme. The upcoming release of Windows 10 will undoubtedly be important, but it won't be quite as much of a make-or-break product as its ancestors.

In this article: azure, bing, cloud, earnings, gaming, internet, microsoft, nokia, q1, q1-2015, search, software, surface, surfacepro3, tablet, windows, xbox, xbox360, xboxone
All products recommended by Engadget are selected by our editorial team, independent of our parent company. Some of our stories include affiliate links. If you buy something through one of these links, we may earn an affiliate commission.