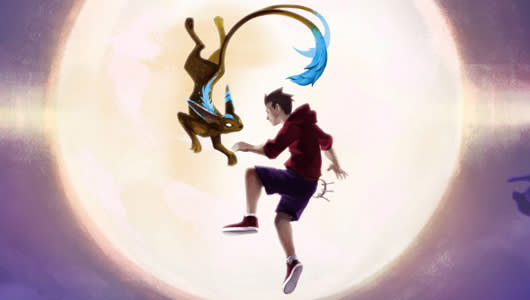 Most media appointments at an event like PAX South 2015 work like this: You meet the person you're supposed to meet, that person shows you the game her studio is working on, and then you rush off to the next booth on your list while cursing yourself for not scheduling time for a snack. Undead Labs handled my PAX appointment a bit differently, sitting me down for back-to-back play sessions with brand-new tablet game Moonrise and a remastered version of State of Decay, the zombie survival game that put the studio on the map.

It was a little jarring to go from adorable pet battles to being torn in half by a zombie, but the two-for-one session provided a nice glimpse of where Undead Labs has been and where it intends to go.

Moonrise is a creature battling game developed for iPad, Android, and Kindle Fire (Undead's Richard Foge joked to me that he'd release the game on a TI-83 if he could). In answer to the question you've already formulated in your brain, Undead is adamant that Moonrise isn't just another Pokémon clone. Moonrise lists Pokémon among its influences, certainly, but it also shares a lot in common with team battlers and real-time strategy games. It's built to be faster, more challenging, and more flexible than a typical turn-based pet battle experience. A typical Moonrise battle starts with your deploying up to two creatures, known as Solari, onto the battlefield. Each Solari is affiliated with a particular element (the rock, paper, scissors model is here in full effect) and has his or her own set of abilities. The player characters, known as Wardens, are also in the fray. Combat occurs in real-time with individual cooldowns on each battle participant; you toss a fire ball with your fire Solari, for example, and then throw a lightning bolt with your second Solari while the first's abilities are cooling down. When both are busy, you tap your Warden and continue the fight. A match ends when either the opposing Solari or their Warden have fallen.

There's a lot of depth behind the basic "touch an attack, touch a target" surface of the game. You can trade skills between Solari, for example, or invest stat points into reducing your cooldowns or increasing the potency of attacks. According to Foge, the flexibility of the system enables players to build combat teams that suit their individual playstyles. You can create a dynamic trio of devastating damage or place your Warden in more of a support role by giving him or her healing spells and buffs. Players can swap abilities between and stat-customize each of the game's creatures, of which there are over 100. Moonrise offers online competitive play as well as a single-player story mode that features individual Warden battles along with dungeons that require you to pull your party through a series of challenging battles without free regeneration in between. It's free-to-play, with purchasable items like Warden Keys (which you spend to capture Solari) and experience boosts. Undead didn't provide a hard release date, but Foge hinted that the game will be out soon.

The demo I played was certainly fun, polished, and unique. I'll have to wait until I see the payment model fully implemented before I can offer a more in-depth opinion.

Also on deck at the Undead Labs booth was the remastered version of State of Decay, set for launch on Xbox One and PC in April. For those who haven't yet played the game, State of Decay is a zombie survival game in which you play as a community of characters trying to survive in a post-apocalyptic world. Unlike almost every other zombie survival game on the market, State of Decay isn't centered on player vs. player interaction. Massively took an in-depth look at it via MMO Burnout back in 2013 for those curious about the deets. The remastered version bumps up the visual fidelity (1080p is in), adds some new content and features, and includes the game's two existing DLC packs. Sadly, there wasn't any mention of an MMO-component sneaking in at the last minute (the team recently posted the MMO is still under wraps). I had a brief hands-on with the game during my session, and it's a marked visual improvement over the original release (not being tied to an XBLA size limit probably helps with that). Many of the folks who played State of Decay the first time around said something along the lines of, "It's good but ugly." With State of Decay: Year One Survival Edition, those players can probably stop at the "good" part. If you already own State of Decay, Undead is offering the new version of the game to you at a 33% discount.

Undead Labs has built two markedly different games. Moonrise and State of Decay couldn't be further apart in terms of looks and mechanics. But both were engaging titles with interesting quirks. I'm curious now to see what Undead is going to do next and just what that MMO will look like.

Massively's on the ground in San Antonio during the weekend of January 23rd to January 25th, bringing you all the best news from PAX South 2015. Whether you're dying to know more about Guild Wars 2's Heart of Thorns, hoping to catch a glimpse of Elite: Dangerous on the Oculus Rift, or angling for some rumors from the SWTOR cantina crawl, you can bet we'll have it covered!
In this article: android, con, console, convention, event, event-coverage, events, expo, f2p, fantasy, featured, free-to-play, freemium, half-feature, hands-on, interview, interviews, ios, kindle-fire, massively-event-coverage, microtransaction, microtransactions, mobile, moonrise, pax, pax-2014, pax-2015, pax-prime, pax-prime-2014, pax-south, pax-south-2015, penny-arcade-expo, pokemon, premium, state-of-decay, steam, undead-labs, xbox, xbox-one
All products recommended by Engadget are selected by our editorial team, independent of our parent company. Some of our stories include affiliate links. If you buy something through one of these links, we may earn an affiliate commission.