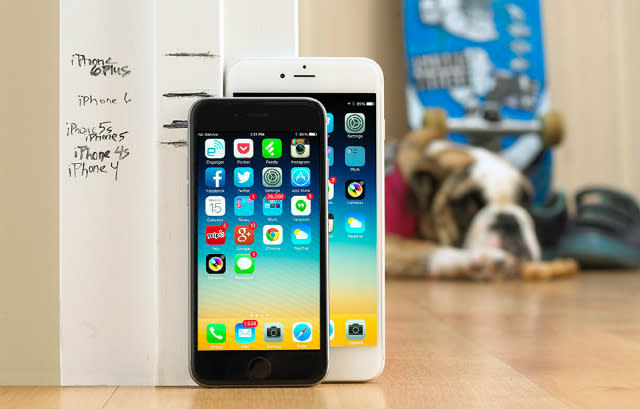 Well, it's that time again. Apple has just released its latest batch of quarterly earnings, and wouldn't you know it -- the folks in Cupertino once again sold more iPhones than it has in any other quarter. We're talking 74.5 million phones changing hands since October, up just about 50 percent from its last utterly insane holiday quarter. Apple doesn't break down sales numbers by model, but its smartphones' bang-up performance helped push company revenue to new heights; the company raked in a cool $74.6 billion in revenue, along with $18 billion in pure profit. That is crazy.

So the iPhones did extremely, ridiculously well - what about iPads? Apple only sold about 21.4 million, and while that's not exactly a number to sneeze at, it's significantly lower than the more than 26 million the company moved during the last holiday season. There are plenty of possible culprits here, from the less-than-game-changing upgrades the iPad Air and Mini lines received earlier this year, to the growth in demand for the iPhone 6 Plus, a device that not only closes the gap between phone and tablet, but also nets Apple more cash than the bog-standard 6. That sort of dip in performance doesn't come out of the blue though -- we saw it last quarter too, a phenomenon CEO Tim Cook referred to as a "speed bump".

Bear in mind, we all expected this quarter to be a blow-out. After all, the last few months represent the first full quarter of sales for the company's new iPhones and iPads, a big push into the holiday buying maelstrom and a more aggressive mobile stance in China. As usual, people are fingering that last, region-specific reason as a big, big reason for that growth. A quick look at Apple's data reveals why: Greater China accounted for about $16 billion of the company's overall revenue over the past three-ish months. That's just about twice the number the region put up last year, making it only slightly less valuable than Apple's business in Europe. Factor in a new report from analysis firm Canalys proclaiming Apple the victor in Chinese smartphone sales (beating Xiaomi, Samsung and Huawei in that order) and it's not hard to see just how crucial China is to Apple's future growth.

Noticeably absent from this first information blast is any word on Apple Pay, which is - among other things - is being baked into some 200,000 self-serve kiosks across the United States. Apple gets a tiny cut from each Pay transaction that gets processed, which could ultimately mean big bucks falling into the company's coffers when phone and tablet sales slip into slightly more reasonable territory. Here's hoping it'll get a detailed shout-out in the customary earnings call, set to kick off shortly.

In this article: aapl, apple, china, earnings, ipad, iphone, mac, mobile, mobilepostcross
All products recommended by Engadget are selected by our editorial team, independent of our parent company. Some of our stories include affiliate links. If you buy something through one of these links, we may earn an affiliate commission.