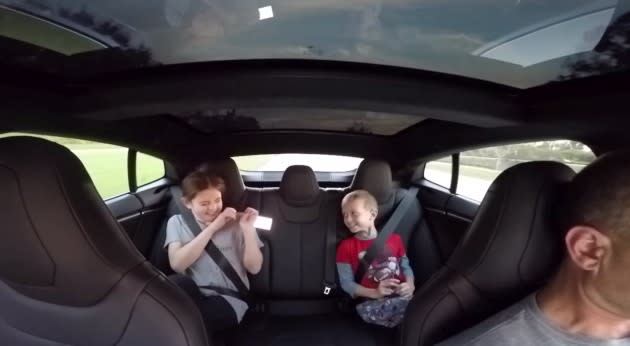 Apparently some people haven't heard that Tesla's dual-motor, all-wheel-drive P85D upgrade to its Model S turns the car into a performance monster. An aptly named "Insane Mode" turns up the power so owners can experience the promised 0 - 60mph in 3.2 seconds (in the regular Sport mode it takes about 4 seconds), and of course a few have been showing it off for their friends. Brooks Weisblat aka DragTimes on YouTube has been having fun with his AWD Tesla ever since it arrived, and a new compilation video showing often-profane passenger reactions has gone viral.

Of course, if you've seen one "acceleration reaction" video then you've just about seen them all, however unlike a Bugatti Veyron or Launch Control'd Nissan this is powered by nothing but electricity and Elon Musk's ego. Nothing compares to experiencing an electric motor's "instant acceleration" for yourself, but if the closest you've been to a P85D (or a Tesla period) is our ride-along video than watching Grandma's reaction can at least give you an idea of how it feels.

In this article: acceleration, InsaneMode, ModelS, P85D, reaction, Tesla, video
All products recommended by Engadget are selected by our editorial team, independent of our parent company. Some of our stories include affiliate links. If you buy something through one of these links, we may earn an affiliate commission.