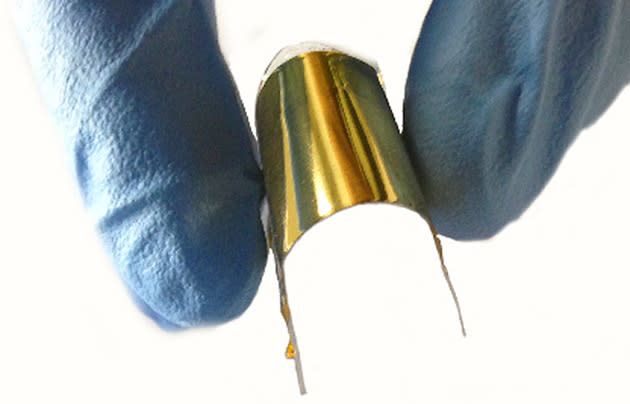 Until we find that perfect technology to power wearables with our own bodies, scientists all over the world are going to keep developing possible candidates. A team from the National University of Singapore, for instance, has developed a flexible, postage-sized device that can convert static electricity into usable energy. One surface of the device is attached to the skin, while the other is covered in silicon with a gold film underneath. Sandwiched in between the two are tiny pillars of silicone rubber -- slimmer pillars lead to bigger output, since they allow a larger surface area to touch the skin.

The group presented their findings at the 2015 IEEE MEMS conference last week, as well as demonstrated how much electricity the device can produce. After attaching the patch to one's forearm and then to one's throat, they found that clenching your fist and talking generate 7.3 and 7.5 volts, respectively. Tapping it with a finger, though, produces 90 volts or enough energy to power several commercial LED lights. The team plans to make their creation even more flexible in the future, so that they can create one in any size and still confirm to the contours of the human body. They'll find that they have a lot of competition from all over the world, though, such as those researchers who developed a tattoo that converts sweat into electricity and those who created a headset that turns a person's jaws into a power plant.

In this article: NationalUniversityOfSingapore
All products recommended by Engadget are selected by our editorial team, independent of our parent company. Some of our stories include affiliate links. If you buy something through one of these links, we may earn an affiliate commission.