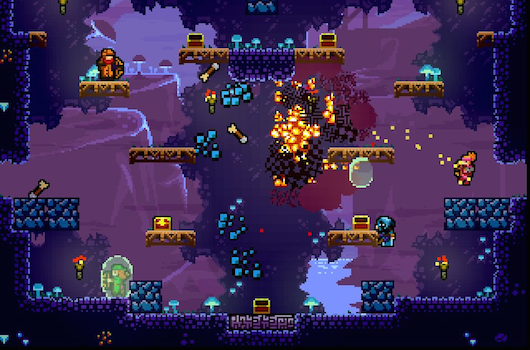 After more than ten years devoted to video games and the people who make them, Joystiq is closing its doors. We won't be reporting on the best games of 2015, so join us for one last hurrah as the Joystiq family reveals their Games of a Lifetime.
This is killing me. It's absolutely killing me. I haven't been able to write a thing since rumors of Joystiq's closure began circulating. I had plans. Grand plans of writing something eloquent and final. As usual, Ludwig has already done a better job of that than I could ever dream, so I'll leave the goodbyes to him (you'll read it soon enough). Suffice it to say that Joystiq has been my home since July of 2006. I was married two months later, a fact I point out to emphasize the following: I've been with Joystiq for my entire adult life. A year out of college, at the young age of 23, I began a career that seemed impossible. I would write about video games, and in return I would be paid by a company located hundreds of miles from my hometown of Tulsa, Oklahoma.

It was too good to be real, and it still is. But the job isn't what I'm going to miss the most. Honestly, I could do without another 2:00AM review embargo for the rest of my life. What I will miss are the people I work with every day. I've met some amazing human beings over the last eight and a half years, but it is the Joystiq crew as it was in 2014 that has earned my undying love. I've always striven to do the best work I can, but work isn't what defines me. These wonderful people define me, and that's what tears me apart. A job I can lose, but how do you say goodbye to a piece of yourself?

With that in mind, maybe you'll understand why I've chosen the games I have. I've certainly spent plenty of alone time with some incredible games, but the ones that stand out in my memory are the ones that I've shared with others. I wish I could say that Joystiq isn't really closing down, that we've all just stepped into some ethereal version of Ludwig's San Francisco apartment for a TowerFall break. Like the schmaltzy ending to your favorite sitcom, we revel in victory and agonize in defeat. We clink glasses, punch thighs, pump fists. Before long, the credits roll and the sounds of our revelry grow quieter until everything finally fades to black. The show is over, there will never be another episode, but in your mind's eye we've never stopped. We'll carry on playing TowerFall forever (or Mario Kart, or Smash Bros, or...).

I'd like to imagine that's what really happened, and so I will.

Okay, so Nights into Dreams isn't something that I played with other people, but its inclusion here should make one thing very clear: I'm a romantic fool. The basic gameplay of flying with precision and speed was totally enthralling, but what really sold Nights for me was its emotional heart. Interwoven among the vibrant dreamscapes of its levels, Nights told a story of young love. Elliot and Claris were destined for one another, and the simple, wordless cutscenes tell that story beautifully. It's completely innocent and perfectly sweet. I should probably add that I later married my high school sweetheart.

Furthermore, the moment when you learn to fly without Nights' help is one of the most moving experiences I've ever had in a video game. It's games like Nights that have firmly solidified the Sega Saturn as one of my favorite consoles of all time.

And, even now, the a capella version of "Dreams Dreams," which can be found on the limited release of Christmas Nights, still makes me weepy. If you want the ultimate, completely accessible and utterly customizeable party game, you will never do any better than Saturn Bomberman. At least, that has been my experience. If, like me, you have a mix of friends, some who play video games and some who don't, Saturn Bomberman will satisfy both. It is, in many ways, a fast-moving board game anyway, and the mix of power-ups and in-level gadgets makes for an endless combination of fiery death traps. If things get overly complex, you can turn off certain items until the less game-inclined guests get the hang of things. I know some purists detest the dinosaurs, which give you bonus abilities, but I can't imagine Bomberman without them.

I don't think I've gotten more local multiplayer mileage out of any other game. Saturn Bomberman is nearly 20 years old now, but if you have a multitap and some controllers, it's still worth breaking out. I suddenly feel like planning a party ...

The Legend of Zelda 2: Adventure of Link

I've made no secret of my love for The Legend of Zelda 2: Adventure of Link. To this day I will defend it as my favorite Zelda game, and for all the reasons I've laid out in the past. I love the swordplay, the free-form exploration, the cryptic hints. I love it for another reason though, and that is for the memories I have of playing it with my brother and my dad. My dad never played many video games with us, but he still enjoyed watching. Through the many hours I put into Zelda 2, Dad would watch and, much to my surprise, he began to know it better than I did.

I'll never forget the time that I was making my way through the godawful Death Mountain labyrinth. It's a very tough stretch in the game, and dying too many times means starting over from the beginning. My father had watched me try (and fail) to make it all the way through and, on my second attempt, he told me I was heading in the wrong direction. Assuming the role of video game expert, I assured him I was going the right way.

You guessed it, I wasn't. I've never played the original Baldur's Gate games, and I don't really care to, but I played lots of the Dark Alliance games on the original Xbox. In college, my future wife and I plowed through both games like hell was at our heels. She was the monk to my necromancer, and we had a blast. We played a lot of dungeon crawlers together, including favorites like Hunter: The Reckoning and even the GameCube version Phantasy Star Online. Another single-player game that was enhanced by the people I played it with. I first played this with my girlfriend (again, future wife) and we were both drawn in by Silent Hill 2's disturbing story and characters. What's remarkable about Silent Hill as a series and Silent Hill 2 in particular, is how much is left up to you. It doesn't neatly fill in every blank, content to let your mind wander to places infinitely more horrifying than its unsettling world of rust and decay.

Silent Hill 2 started something of a horror game tradition for us. Horror games tend to have the best writing, and the most tension, which makes them nearly as much fun to watch as they are to play. As the years went by, we would play more horror games together, particularly the Silent Hill and Fatal Frame series. I think my other personal favorite is probably Fatal Frame 2, though I'll always have a soft spot for Silent Hill: Shattered Memories too.

I have a Japanese copy of Fatal Frame 4, and I've even installed the English translation patch, so that it's completely playable on an un-modded North American Wii. I had meant to finally finish it and write about it for Joystiq this year, but it looks like that's not in the cards. Maybe it's time to revive a tradition. The intense Puzzle Fighter rivalry between my wife and me will never diminish. The flame will burn forever. Puzzle Fighter is, in my opinion, the best puzzle game ever designed. It's another reason that there will always be a Sega Saturn in my house.

Virtua Fighter 2 is a game that I mostly played by myself. I occasionally played with friends, but since I was the only person who owned the game, I got a lot more practice. Suffice it to say that most of my friends eventually wanted to play something else. I was obsessed with VF2, both at home and in the arcade. In particular, I loved Lion's praying mantis style, so much so that I became determined to take up the martial art myself. Surprisingly, there aren't a lot of praying mantis kung fu schools in Tulsa, but my mom just happened to know a friend who took Aikido classes.

Six years later, I was a second degree black belt, hence my online moniker, SenseiRAM (Sensei Richard Aaron Mitchell). As an added bonus, Sega went on to include an Aikido practitioner in Virtua Fighter 3, named Aoi. Jacky is probably still my best character though.

Finally, since I don't know where else to put this, I once cleared the arcade mode of the Sega Saturn version of Virtua Fighter 2 in two and a half minutes. Jacky was a monster. It's also worth pointing out that the advent of online play has ruined my self-perception when it comes to fighting games. After all the virtual beatings I gave my friends, I guess I deserve that.

Also, I may have had a mix CD with Akira's theme on it. Maybe.

I've played though Halo so many times it's practically muscle memory by now, most of those memories involving me foolhardily rushing at Elites and bashing them in the face. Halo's co-op campaign was the perfect way to wile away a holiday with friends and family, mowing down Covenant as our stomachs went to work digesting inadvisable amounts of turkey.

One summer home from college, after I had turned 21, I threw a party at my parent's house. It was wild. There was beer. People I didn't know started to show up. Someone, somewhere, was smoking pot. But me, I was in it for the Smash Brothers Melee tournament I had set up with my geekiest friends.

I lost, and it sucked. I blame the beer. But man, if Melee isn't responsible for some of the best times I've ever had playing a video game. From the bitter defeats to the glorious wins, it's magic from front to back. And please, turn on the items. If you can't have victory snatched from you by a surprise Pokeball, it's not Smash.

Also, I've never told my parents about that party. Shhhhhhh.

TowerFall
Specifically, I'm talking about TowerFall Ascension - Joystiq GDC 2014 Edition. For the rest of time. My heartfelt thanks to every person who holds Joystiq in their hearts. We shaped it into the best thing we could imagine. It can never be replaced, and my love for it can never be fully expressed.
[Images: Konami, Microsoft, Matt Thorson, Nintendo, Sega, Capcom, Interplay]
In this article: games-of-a-lifetime
All products recommended by Engadget are selected by our editorial team, independent of our parent company. Some of our stories include affiliate links. If you buy something through one of these links, we may earn an affiliate commission.