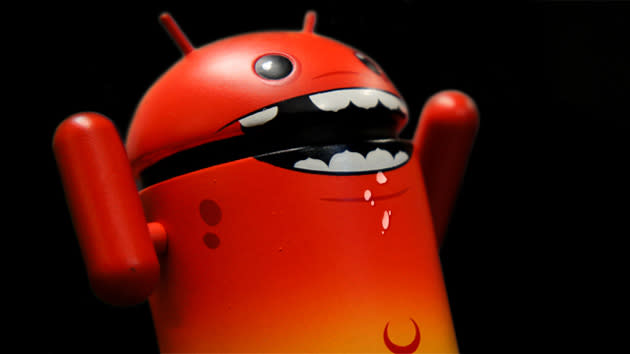 As a rule, rogue Android apps don't last long on Google Play -- either Google catches them quickly, or enough people complain that something gets done. That doesn't appear to have happened with a recent batch of apps, though. Antivirus developer Avast has noticed that multiple titles, including some with millions of downloads, have been harboring a sneaky form of adware that tries to fool you into either paying for content or violating your privacy. The apps will often work normally for days, but eventually pester you with ads warning about non-existent updates and viruses every time you unlock your phone. If you're tempted enough to tap one of the ads, you're steered to far more dangerous content that may send premium text messages (without asking, naturally), harvest personal info or otherwise compromise your device.

At least some of the offending apps are gone as I write this, so there's no doubt that Google is clamping down. However, it does raise the question of why these apps managed to get relatively popular before the hammer fell -- even if they were pumped up by fake downloads, there were negative reviews indicating that something was amiss. We've reached out to Google to get more details about what happened and what it might be doing to mitigate these problems in the future. For now, your best defenses are to either install only the apps you trust, or to read reviews carefully before you take the plunge.

In this article: adware, android, google, internet, malware, mobilepostcross, scamware, security, smartphone
All products recommended by Engadget are selected by our editorial team, independent of our parent company. Some of our stories include affiliate links. If you buy something through one of these links, we may earn an affiliate commission.