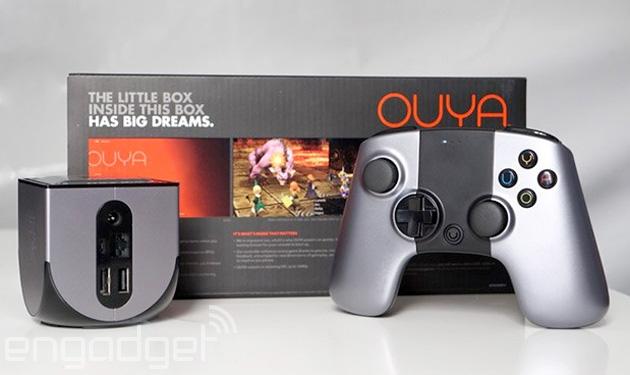 Is Chinese giant Alibaba investing $10 million into California-based game console maker OUYA? That report remains unconfirmed, but OUYA did confirm this morning that Alibaba is getting the OUYA game library on its YunOS platform. Sorry, the what platform? It's essentially a version of Android that was created by Alibaba, intended to compete with Android in China. So does that mean OUYA is heading to smartphones in China? Not quite.

OUYA says its game service will arrive on Alibaba's Tmall set-top box, which apparently already has streaming options for more robust games (the press release calls out soccer game Winning Eleven 2014 and fighting game Street Fighter 4). As far as control is concerned, there's no mention of OUYA shipping its gamepad to China -- OUYA reps tell us the company isn't shipping a controller to China, and that Alibaba sells its own for the Tmall set-top box.

So, how does this impact you? Well, if you don't live in China, it doesn't impact you too much -- OUYA continues to exist as a platform in North America despite its multiple pushes into China. As far as how OUYA approaches its original North American audience in the future, CEO Julie Uhrman has a quote in the press release that's telling of long-term plans: "Markets, like China, without the baggage of the US console market, could be the game console leaders in ten years. That's where OUYA wants to be."

More bluntly, that's where OUYA needs to be -- the company's plans to disrupt console gaming in the US faltered after early reviews panned the console and its gamepad. There was even a hardware revision between Kickstarter backers receiving their console and its eventual retail release months later. In so many words, we don't expect this is the last time we'll be writing news of OUYA moving into developing markets and out of the shark pond that is North American game console sales.

In this article: alibaba, android, china, hdpostcross, julieuhrman, mobilepostcross, ouya, TL19OUYA, tmall, yunos
All products recommended by Engadget are selected by our editorial team, independent of our parent company. Some of our stories include affiliate links. If you buy something through one of these links, we may earn an affiliate commission.