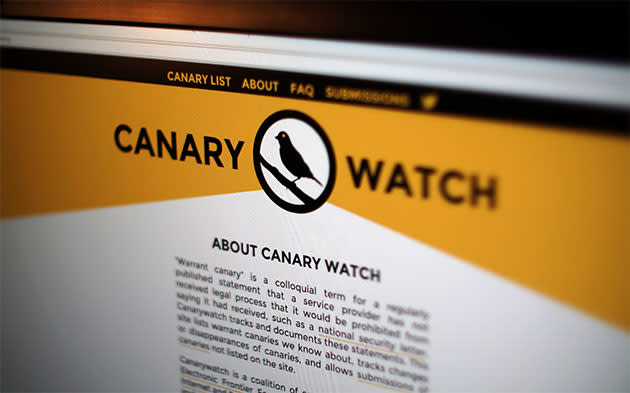 Internet service companies like Reddit and Tumblr want to be transparent about user privacy. The problem is, they're sometimes forced by law to clam up when they receive specific national security data requests from agencies like the NSA or FBI. But there's nothing stopping them from saying they haven't received such requests, and that's where a new website called Canary Watch comes in. Like the birds that show a mine is safe by not being dead, the site tracks statements by websites like Pinterest saying they haven't received national security requests. If such "warrant canaries" suddenly disappear, Canary Watch will flag that fact, revealing that the site actually has received a request without breaking any laws.

Canary Watch was created by the Electronic Frontier Foundation (EFF), NYU's Technology Law & Policy Clinic and other privacy advocate groups. So far, it's only tracking a handful of sites, including secure cloud platforms like Rsync.net and Spider Oak, along with social/news sites Tumblr, Reddit and Pinterest. The EFF points out that most folks don't pay any attention to the transparency "canaries" (or even know they exist), so Canary Watch tracks any changes or disappearances and explains what they mean.

Canaries allow service providers to be as honest and transparent with their customers as they are allowed to be by law.

For instance, Reddit says that as of January 29th, 2015, it has "never received a National Security Letter, an order under the Foreign Intelligence Surveillance Act, or any other classified request for user information." Were that statement to disappear, Canary Watch would flag it, indicating that the site was likely served a warrant. There would be no way of knowing what the request was, however, unless Reddit successfully fought to unveil it (which it says it will do).

For people that follow privacy issues closely, the new site doesn't bring anything new. However, as the EFF told Threatpost, canaries "allow service providers to be as honest and transparent with their customers as they are allowed to be by law." More importantly, it brings the concept of canaries to the public and may help motivate sites to better protect your privacy from government overreach.

In this article: Canary Watch, EFF, FBI, NSA, Privacy, warrant canary
All products recommended by Engadget are selected by our editorial team, independent of our parent company. Some of our stories include affiliate links. If you buy something through one of these links, we may earn an affiliate commission.