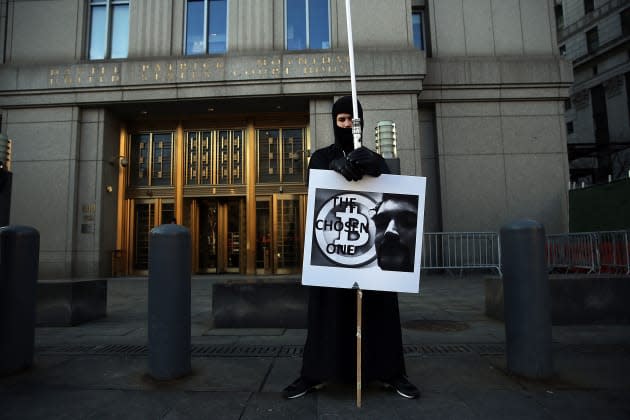 After a trial of several weeks, a federal jury has found Ross Ulbricht guilty of running and operating the online black market known as Silk Road. He was found guilty on all seven charges, which include money laundering, narcotics trafficking and computer hacking. Ulbricht was accused of being the "Dread Pirate Roberts," the so-called kingpin of Silk Road, which he apparently started back in 2010 in order to sell hallucinogenic mushrooms. It then grew into a digital marketplace for narcotics and other illegal items like fake passports. Silk Road was cloaked in the Tor anonymity network to hide it from view and used bitcoin as its currency of choice due to how difficult it is to track. The site was eventually shut down in 2013 when the FBI seized its servers and arrested Ulbricht.

The case against Ulbricht was seemingly overwhelming. When arrested, his laptop was seized, and showed him logged into Silk Road under his pseudonym. Law enforcement also allegedly traced thousands of bitcoin transactions between Silk Road servers and Ulbricht's laptop, stating that a total of nearly $13.4 million was transferred to Ulbricht. Additionally, police found a "crumpled piece of paper" with details that contained a ratings system similar to one that was discussed on a Silk Road forum. Law enforcement was also able to track chat logs, forum posts, messages and emails that all point to the Dread Pirate Roberts dealings in drugs and, yes, even plotting the assassination of would-be blackmailers. Prosecutors accused him of spending almost $730,000 to arrange the hits, though there's no evidence that these murders actually took place.

The defense, for their part, said that though Ulbricht started Silk Road, he left a few weeks later, and that the Dread Pirate Roberts was someone else. They cited as evidence the fact that Silk Road 2.0 cropped up shortly after Ulbricht was arrested and that personal accounts are often duped or faked. Defense lawyers also pointed out that Mark Karpeles, the former head of Mt. Gox, the now-defunct bitcoin exchange, was once under investigation as being the head of Silk Road. Unfortunately, the latter was not admissible in court as the judge deemed it merely law enforcement suspicion rather than anything concrete.

Ulbricht faces a maximum penalty of life in prison from the narcotics and criminal enterprise charges.

In this article: bitcoin, rossulbricht, silkroad
All products recommended by Engadget are selected by our editorial team, independent of our parent company. Some of our stories include affiliate links. If you buy something through one of these links, we may earn an affiliate commission.