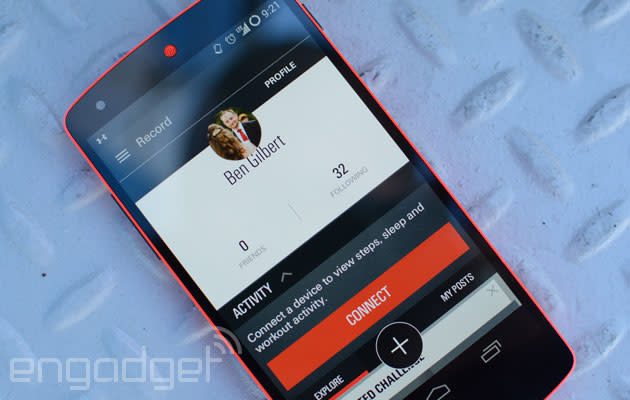 Under Armour just outed its own fitness-tracking app at last month's CES, but the company seems keen on continually improving its software arsenal. To do so, the Baltimore-based sports outfitter paid $85 million in early January Endomondo: an app for Android, iOS, Windows Phone and BlackBerry that keeps tabs on data from running, walking, cycling and other distance sports. Endomondo also plays nice with wearables from Jabra, Garmin, Fiitbit, Withings and more. But that's not all: Under Armour also announced alongside its Q4 earnings report that it had nabbed MyFitnessPal for $475 million, too.

MyFitnessPal offers the nutrition piece of the healthy-living puzzle, allowing users to tally daily stats on their food habits. With 100 million registered users between the two, it's easy to see why UA for be interested in the pair, and for now, they'll operate individually as subsidiaries of the larger company. Of course, Under Armour has activity-tracking gadgets, and in late 2013, it nabbed MapMyFitness to bolster the software of things. One thing's for sure: the folks in Maryland are getting serious about grabbing a share of the fitness tech space, unafraid to shell out some serious coin to do it.

In this article: activitytracking, app, apps, endomondo, fitness, fitnessapp, mobilepostcross, myfitnesspal, running, software, underarmour
All products recommended by Engadget are selected by our editorial team, independent of our parent company. Some of our stories include affiliate links. If you buy something through one of these links, we may earn an affiliate commission.