Parrot's latest drones are for farmers and firefighters

ICYMI: Wildland firefighting is about to get an AI assist 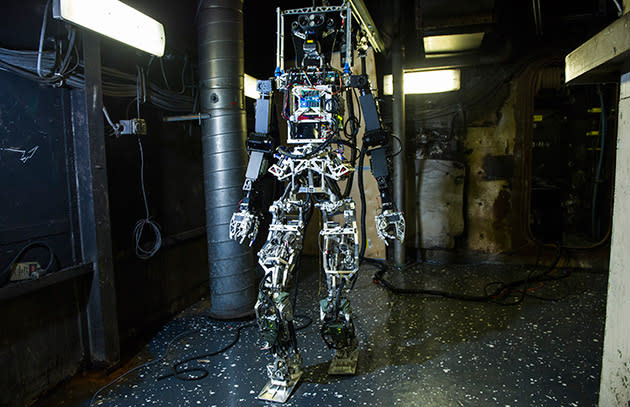 SAFFiR, the humanoid firefighting robot that the US Navy and Virginia Tech engineers have been developing for years, is now more than just a blueprint. In fact, the military division has already demonstrated what the biped can do aboard one of its decommissioned ships. During a series of tests conducted in November 2014, it worked well enough to navigate uneven floors (extremely difficult for humanoid machines), identify equipment using thermal imaging and handle a hose to put out small fires. The Shipboard Autonomous Firefighting Robot did need a bit of help from a sidekick, though. No, not the firefighting snakebot Anna Konda (which is unfortunate, if you think they're the perfect pair), but a small drone created by Carnegie Mellon's Robotics Institute.

That drone is an autonomous quadcopter called Damage Control Technologies for the 21st Century (DC-21) designed to be smaller than commercial models hobbyists can buy, so it can fit in tight entrances. It uses infrared to detect fires, depth cameras similar to Kinect's to map out locations, and it obviously has the capability to communicate, as it was made to relay those data to SAFFiR. Since it's so small, the battery that can fit in it only lasts for 5 minutes. Its creators are planning to build a version with two large propellers instead of four small ones, though -- that way, its power source can last for up to 30 minutes.

As for SAFFiR itself, well, looks like a goofier, less terrifying version of DARPA's Atlas. It stands at 5-feet-10-inches and weighs 143 pounds, equipped with infrared and a rotating light detection and ranging (LIDAR) laser to be able to make its way through dense smoke. It apparently has the capability to perform tasks autonomously, but since the goal is for people and robots to work together in the face of danger and not to replace the sailors, it was designed to take orders from a human controller.

Despite performing well during the demo last year, that doesn't mean SAFFiR's ready to be deployed. It still needs to be tethered to stay upright in its current state, and it's just much too slow to be a first responder. Plus, the current model is not water- and fire-proof, which sounds like a recipe for disaster since it's firefighting robot on a ship. That's why the Navy plans to commission a more advanced design with "enhanced intelligence, communications capabilities, speed, computing power and battery life for extended applications." Also, SAFFiR will most likely be fitted with more sensors in order to perform mundane tasks and free up sailors to accomplish more complicated ones.

In this article: firefighting, humanoid, military, navy, UsNavy
All products recommended by Engadget are selected by our editorial team, independent of our parent company. Some of our stories include affiliate links. If you buy something through one of these links, we may earn an affiliate commission.