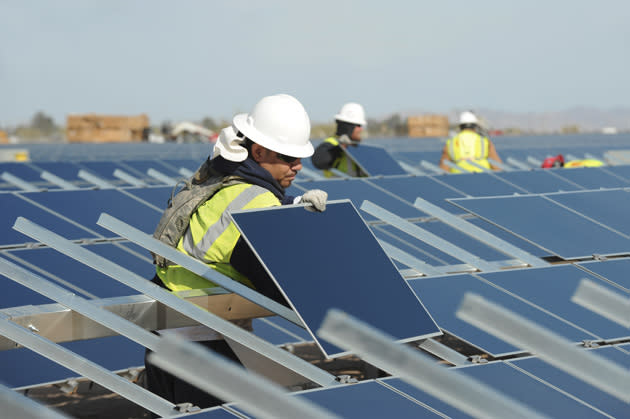 Apple makes much ado about using clean energy sources to power its buildings these days, and it just put its money where its mouth is... a lot of money. The company is investing a whopping $848 million in a First Solar plant in California's Monterey County that, according to Apple chief Tim Cook, should generate enough electricity to power 60,000 homes. Apple will get a 130-megawatt supply from the solar farm to light up buildings such as its future spaceship-like campus, while the remaining 150 megawatts will go to Pacific Gas & Energy's grid. Reportedly, this is the largest commercial deal to date in the solar industry -- it certainly eclipses many of the other green energy initiatives we've seen in tech, which tend to "only" require tens of megawatts.

In this article: apple, california, cleanenergy, energy, firstsolar, power, solar, solarenergy, solarfarm, solarpower, spaceship, timcook
All products recommended by Engadget are selected by our editorial team, independent of our parent company. Some of our stories include affiliate links. If you buy something through one of these links, we may earn an affiliate commission.