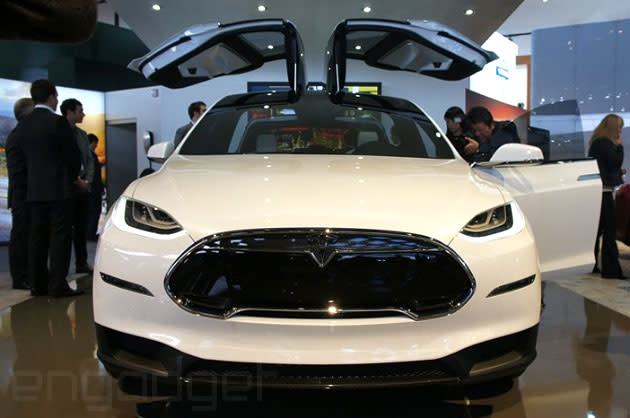 While Elon Musk keeps his eye on a SpaceX rocket launch this evening, his car company just released its financial data for the last year. Tesla met its goal of building 35,000 cars in 2014, but says some shipments were held back as a result of launching the shockingly-fast AWD P85D Model S. Beyond the numbers, the company is raising its goal for next year to 55,000 vehicles, including the Model X SUV it says is still on track to arrive in Q3. There are about 30 Model X vehicles in testing now, while Release Candidates are slated for March. The only bad news? Its $1.1 billion in revenue for the quarter was lower than analysts expected, and operating expenses doubled from the same period last year. The company's earnings call is scheduled to take place at 7:30PM ET, and if there's any news from that we will let you know.

Update: On the call, Musk mentioned that Tesla's battery for homes and businesses will launch in the next month or two.

In this article: ElonMusk, ev, ModelS, ModelX, p85d, supercharger, Tesla, TeslaMotors
All products recommended by Engadget are selected by our editorial team, independent of our parent company. Some of our stories include affiliate links. If you buy something through one of these links, we may earn an affiliate commission.