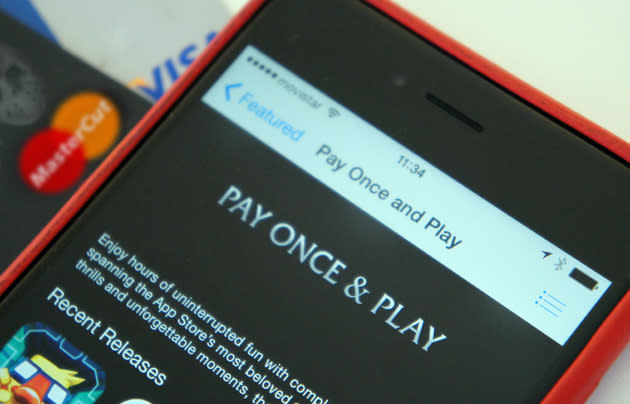 No one likes having to buy carrots/coins/crystals just to progress in a mobile game. Thankfully, a new "Pay Once and Play" section has appeared in iTunes that lets you discover/buy games you can be sure won't hold you hostage with such in-app purchases. Kids racking up a huge bill on their parents' credit cards is a storied theme (something that has already caused Apple and others headaches), a problem that this new section should go some way to alleviate. As the name suggests, none of these games are actually free -- but at least you know the costs upfront. It appears Apple might be making other changes to the games section of iTunes, too. Developers are reporting that artwork and icons for their app that was previously passed as ok, is now being rejected for containing images deemed unsuitable for the very young (guns and gore etc.). Important to note, game content isn't affected, just the materials that promote it. It seems like Cook and co are making iTunes games a bit more family friendly.

In this article: apple, apps, gaming, InAppPurchases, ipad, iphone, itunes, mobilepostcross, payonceandplay
All products recommended by Engadget are selected by our editorial team, independent of our parent company. Some of our stories include affiliate links. If you buy something through one of these links, we may earn an affiliate commission.